The Mega Man franchise has had a rocky history. Once held as the pinnacle of action platforming, the franchise had slipped from mainstream success. Although there are a few Mega Man releases here and there, most of them have been compilations or remasters as of late. Mega Man 11 enters the scene at an interesting time. Long time fans and newcomers alike have enjoyed the various Mega Man Legacy Collection titles, but they’ve also been burned by Mega Man-like revivals such as Mighty No 9. Classic game franchise are having a bit of a revival period, with stunning celebrations like Sonic Mania. Does Mega Man 11 breathe new life into a stagnant franchise, or continue the trend of mediocrity. Let’s see if the blue bomber gets due justice in this latest action packed adventure. 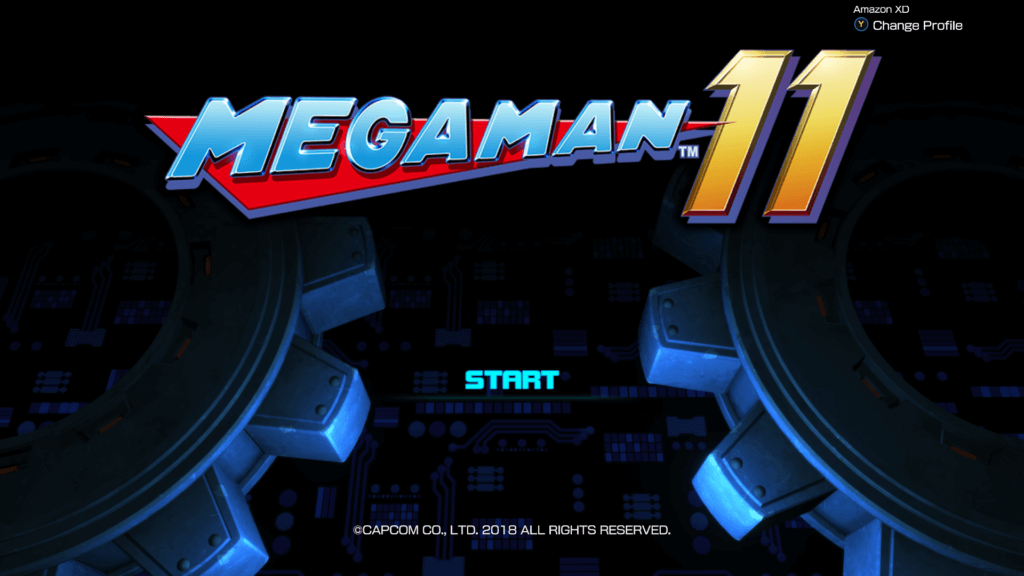 When it comes to story, Mega Man 11 doesn’t have too much to offer. This is in line with the rest of the franchise, so it’s not too big of a deal. Once again, the good Dr. Light is at odds with Dr. Wily, putting Mega Man squarely in the middle. We get a few scenes of Dr. Light discussing his early days of science with Mega Man, as well as a fun intro cutscene. Beyond that, the story is more or less a container for the expected action. There is one story element that revolves around the Double Gear system; a device created by Wily that lets the robotic user slow down time and become more powerful. Mega Man obtains this device, so it becomes a bigger element in gameplay than the narrative. However, it was nice to see some changes to the formula, both in story and gameplay features. 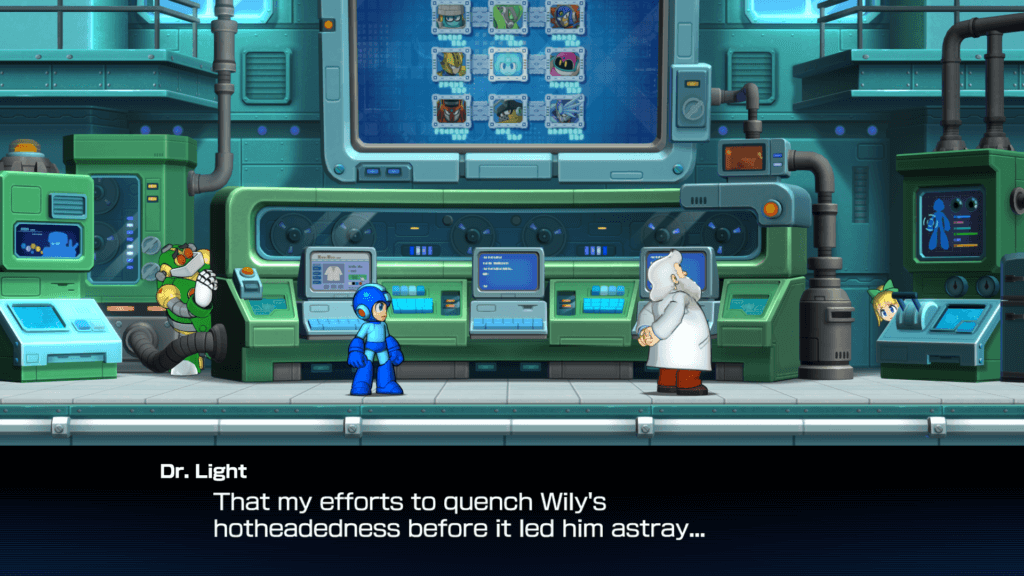 For the most part, Mega Man 11 follows the established franchise formula. As the blue bomber, you traverse eight stages themed after their robot boss. Once defeated, Mega Man obtains their weaponry and can use their powers in subsequent levels. The robot bosses you’ll fight don’t sound all that interesting (Impact Man, Tundra Man, Bounce Man), but they’re surprisingly well designed and their powers are fun to use. Figuring out various enemy and boss weaknesses is a key element to the game, and experimenting with the different weapons plays into that. It’s a good thing that the weapons are inventive and unique, and often super powerful when wielded correctly. 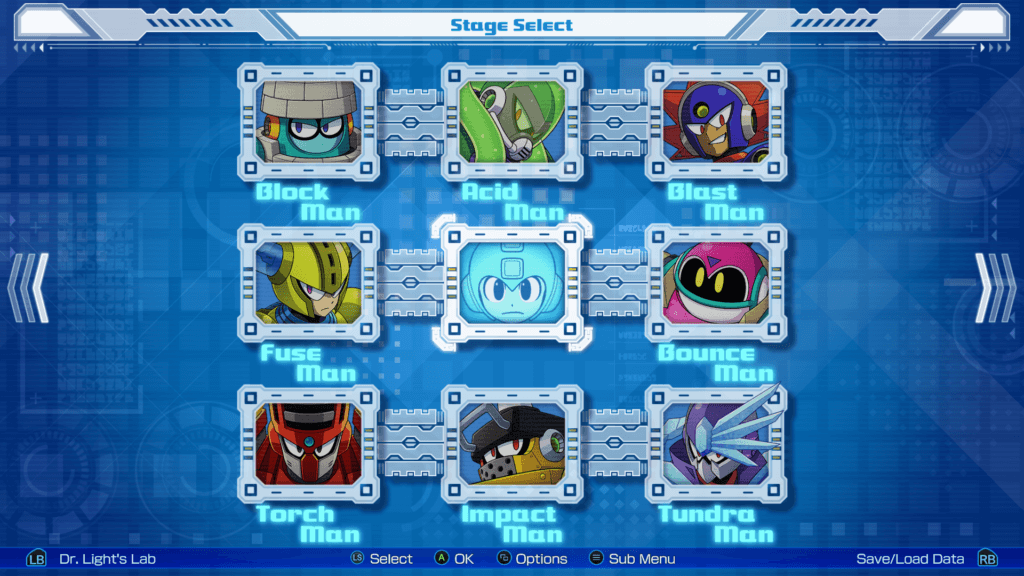 The Double Gear system is one of the big additions. This allows Mega Man to either slow down time or give his shots extra power. Although it sounds a bit simple, these two powers can fundamentally change the way you approach different obstacles. Platforming becomes a bit easier when you’re able to slow down time, and well placed shots are that much more satisfying when you have them powered up. The boss weapons you obtain are also affected by the Double Gear system. Using the Power Gear ability while using a special weapon makes it even more powerful. Flame blasts become homing missiles, projectiles pass through enemies, and shield become damage dealers. It’s a fun way to add more powers without using an upgrade system.

That said, you can buy a variety of upgrades and consumables from Dr. Light’s lab in between stages. You buy these goodies by spending bolts, which can be picked up from defeated enemies or found in the wild. Some items refill your life bar or special weapon energy, while others save you from pitfalls or spikes. There are more permanent upgrades called parts, and while expensive, these are invaluable. I overlooked them initially, but after buying a few, I found a new appreciation for their game-changing abilities. One part automatically charges your buster, and another allows you to move at normal speed even when time is slowed down. Others reduce knock back and damage taken, while others lead to even more secret unlockables. 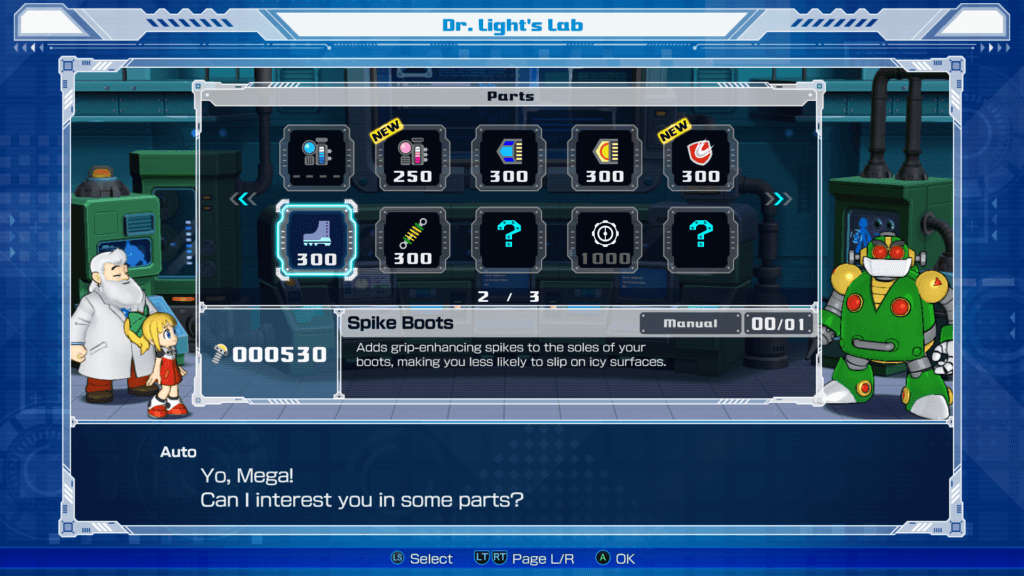 Should You Buy Mega Man 11?

Ultimately, Mega Man 11 is a decent return to form, but a bit disappointing. I was hoping it would feel more celebratory, like a Mega Man version of Sonic Mania. It doesn’t reach those heights, but it doesn’t dip below average either. As a seasoned Mega Man fan, I was impressed in some areas and disappointed in others. The gameplay feels good, but the visuals are a bit forgettable. The weapons are fun, but robot bosses feel uninspired and lacking imagination. The core foundation of a great Mega Man game is here, but it fudges up the execution. For the most veteran of Mega Man players, you’ll enjoy the challenge for the most part. For those new to the franchise, I recommend you pick up the Mega Man Legacy Collection first. It’s a decent time, but Mega Man 11 isn’t exactly the knockout hit I was hoping for.