Fe is a relaxing and passive 3D platformer that takes place inside an imaginative and colorful world.  You play as a fairy creature known as a fe.  Fe possess the ability to “sing”, using different pitched calls to speak to various species of animals.  As you explore the world of Fe, you’ll learn new abilities, traverse the beautiful world, and collect some crystals along the way.  At an indie budget, does Fe contain enough platforming goodness to keep fans excited? 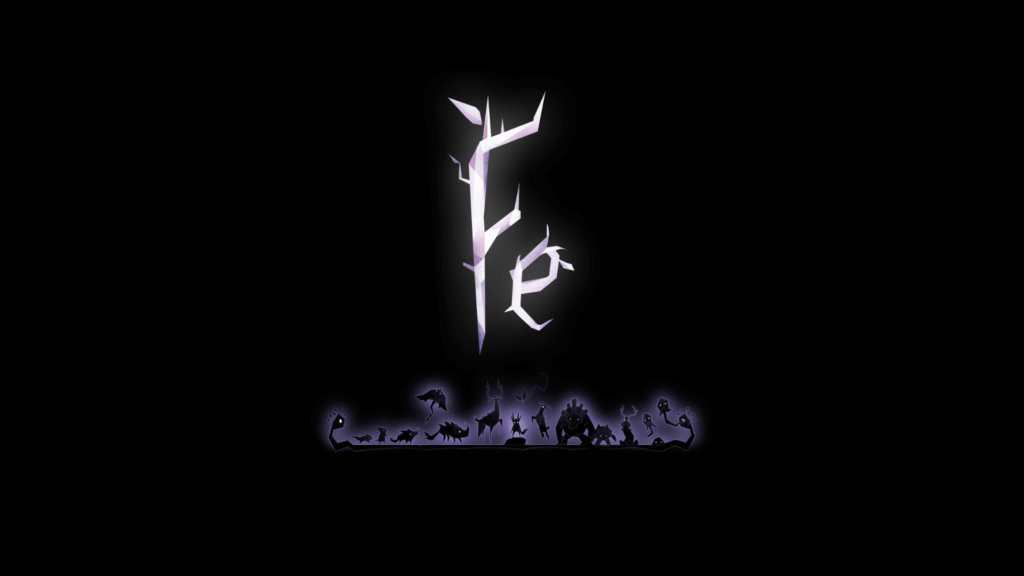 Fe‘s story is almost non-existent, but I don’t want that to come off as a complete negative.  Instead, Fe doubles down on atmosphere and visual style as a way of storytelling.  The game gives you barely any information before dropping you into the game world, and the lack of any spoken dialogue is apparent.  The narrative structure of Fe is pretty standard, all things told.  There’s a negative group of sentry-like enemies who will hunt you down and capture you, and you work to overcome these enemies by befriending new species of animals.

As you meet new species and learn their songs, you’ll be able to reach new areas, further exploring the crystalized and almost alien world of Fe.

Fe plays like many other 3D platformers, with a focus on a few key gameplay factors.  For the most part, you’ll explore Fe‘s numerous free roam areas, following the critical path laid before you.  At any time, you can call on a trusty bird companion to lead you towards your next objective.  Additionally, there is always a waypoint on your minimap, so getting lost in Fe is rarely an issue.  As you traverse through the various locales of Fe, you’ll meet new species of animals and help them with their issues.  Once you’ve gained the trust of the animals that inhabit a specific area, you’ll learn their language in the form of a new song.  Songs are used to interact with items scattered around the area, most of which give you access to previously inaccessible areas.  In this way, Fe resembles a game like Metroid or Castlevania, where you’ll often have to revisit areas of the map once you’ve acquired the right skill.

You can also venture off the beaten path in search of pink crystals.  After collecting a set amount, you can turn the crystals in for a new ability.  These abilities usually aid traversal, making your fe more agile and quick.  For example, an early upgrade allows you to climb trees and leap from their tops, allowing you to reach high up ledges.  Another lets you glide across wide gaps, making difficult jumps a breeze.  Eventually, the upgrades become less worthwhile, as searching for the pink crystals can become a bit tiresome.

While the visual style of Fe is something to behold, the actual map design is a bit uninspired.  It’s undoubtedly pretty, but upon a closer look, the actual landscape is quite boring.  Searching every nook and cranny of the map for these crystals can quickly become frustrating, and you’ll soon realize just how empty the game feels.  Since there’s never any actual combat (dealing with enemies is purely a stealth endeavor), a lot of Fe‘s game time feels like an occasionally stressful but mostly relaxing hike through the woods.

Fe really shines in its presentation, thanks to its unique and vibrant art style.  The world seems a bit soft, but is full of sharp edges and odd geometry.  The best way I could describe it was as a “crystalized look”, often more jagged than smooth.  This work though, as each new area of Fe is often flooded with one color.  Early areas are full of vibrant purples and pinks, while later areas show off bright oranges and muted blues.  It’s a good way to distinguish what part of the map you’re currently in, and I was generally pleased with the single-color choice when dividing up areas.  Some of these areas look better than others, but even the most tame areas are a a wonder to behold. 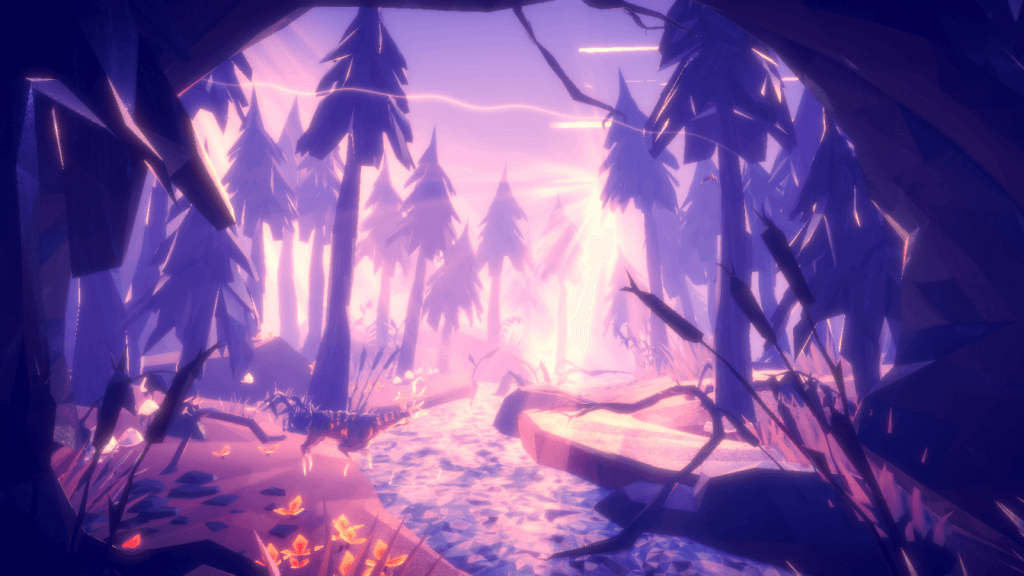 Audio-wise, things can be a mixed bag.  The soundtrack is often quite and lingering, used more as a way to boost atmosphere than anything else.  The orchestral score is quite nice, although I more often noticed its absence than the music itself.  The sound design, however, is utterly fantastic.  The chirps of each new song are distinct, making it easy to figure out which one you have equipped.  A few of the “songs” can be a bit obnoxious at times, especially the first song you learn.  This essentially sounds like one long high-pitched “coo”, which got slightly annoying as time continued.  Highlights in sound design come in the form of environmental sounds.  Things like rushing waterfalls sound great, and the feeling of soaring through the air is only complimented by the beating of the wind.

Should You Buy Fe?

Fe is an interesting title, mainly due to its unique art style and focus on dialogue-free storytelling.  The narrative is symbolic, and even after I finished it, I was still a bit unclear on some things.  The actual gameplay is quite serviceable, and following the critical path is enjoyable.  However, collecting the pink crystals scattered across the land feel more like a chore than anything, and the rewards are often not worth the hard effort.  Fe is a beautiful world, but one that feels empty. 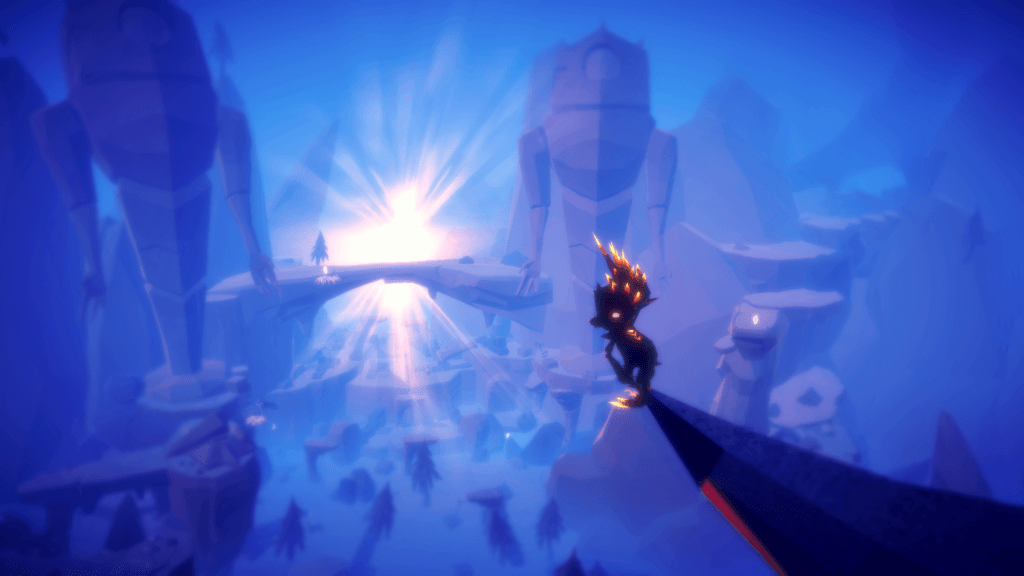 If you’re a fan of 3D platformers that’s more about traversal than collectibles, Fe definitely has something to offer.  It’s definitely a pretty game, but lacks a bit of substance.  I had fun with Fe, and ended up finishing the game in under 4 hours.  After the credits rolled, I didn’t care enough to go back and search for the rest of the collectibles, so take that as you will.  Fe is artistic, it prioritizes stealth over combat, and will last you anywhere from 3 to 10 hours.  If that sounds like a good time, I recommend giving Fe a try.  It’s certainly no Super Mario Odyssey, but stands on its own merits as a good attempt at using the platformer genre for something a bit more artsy.