After Nintendo’s big press conference, the details of the new Nintendo console dubbed the “Switch” are now out in the wild.  After a lot of fan reactions and industry talk, the dust has started to settle.  It’s a great opportunity to reflect on the facts we know and the expectations we have.  Nintendo didn’t hold back during their press conference either; we know full pricing and release date.  Before I get into specifics, I’ll let you know right at the top that the console releases worldwide on March 3rd, 2017.  There’s probably a few more details you’ll want to know before you throw down your hard-earned cash though, so let’s look at the numbers.

What’s in the Box?

The Switch is an interesting console, no doubt.  I wouldn’t expect anything less from Nintendo, though.  The Switch console will come with a charging dock, the console itself, and a set of controllers called “Joycons”.  It also included an AC adapter for the charging dock, as well as a HDMI cable to hook into your television.  In the picture above, you can see the Joycon’s attached to the “Pro Grip” which is not included in the box.  There’s no packed in-game, so people looking to show off their console to friends won’t exactly have a Wii Sports equivalent free with the console.

There were a lot of rumors surrounding the Switch’s price.  After the devilishly low MSRP of the Nintendo Wii, and the overall shroud of mystery around the console, everyone expected Nintendo to play fair with the Switch.  That’s exactly the kind of pricing we got when Nintendo officially announced the suggested retail price to be $300 USD.  There are some caveats to this, as you will most likely not be walking away with a Switch for just the console price.

Here’s where things get a bit ridiculous, in my opinion.  While the console itself carries a low price, it’s the accessories that are going to run up the bill.  For starters, the “Pro Grip” that enables the Joycons to be held like a standard controller will run you $69.99.  That’s ten dollars more expensive than a comparable controller on competing systems.  This grip does not come with extra Joycons either, those will run you $39.99 a piece.  Keep in mind however, that the left side Joycon has different functionality from the right one.  You’ll have to buy them in pairs, bringing the most likely purchase price to $79.99 for the pair.  That’s $150 to get yourself a grip and an extra set of controllers. The console itself is the screen piece you see in the pictures.  The larger piece is the charging dock, which will run you $89.99 to replace.  Since the Switch seems to have a decent focus on multiplayer and party use, it’s disappointing to see these kinds of high prices to get started. 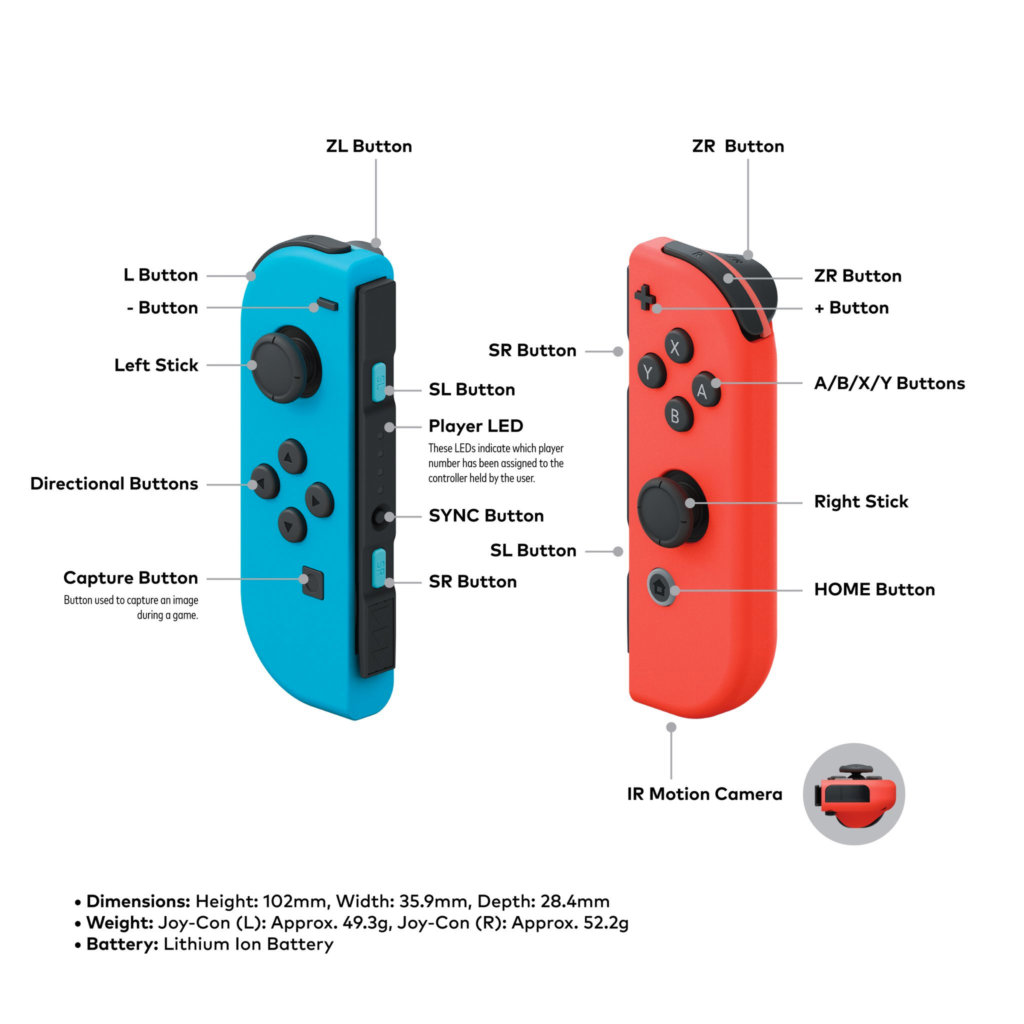 An extensive breakdown of each Joycon’s functions and layout.

The Switch aims to refine how we experience games.  In true Nintendo fashion, there’s a focus on playing with friends.  The console itself embodies that, with the built-in screen.  You can play the Switch while it’s resting in the charging dock and hooked up to your television.  Additionally, you can remove the console and set it up on a stand, playing off the screen.  This makes it easier to play on the go, but the battery life is a disappointing 3-6 hours.  This means you won’t be taking it with you on any long car rides without a power strip.  A longer battery life would’ve helped the Switch dominate the handheld market, but for now, it’s simply an easier way to play the Switch despite television requirements.

Whether you’re a fan of them or not, motion controls are a part of gaming.  While I think the days of “waggling” your Wii-mote are over, the Nintendo Switch still contains some pretty cool control tech.  Besides movement sensors, the controls also have dynamic rumble.  While I haven’t had a chance to get hands-on time with the console, the rumor is that the rumble is pretty advanced.  It feels more like tactile feedback than a simple vibration.  Additionally, the Joycon contains an IR sensor that can pick up different shapes in front of it.  For example, the IR sensor can supposedly tell the amount of ice cubes in a glass, or whether you’re using the hand sign for rock, papers, or scissors.

Nintendo has struggled to pull together a good online service for quite some time.  While the 3DS and Wii U online has been functional, it’s been a far cry from the offerings of Nintendo’s competitors.  After a pretty surprising announcement that the Switch online service will be paid, they will have to step it up if they want to compete.  The online services won’t start paid however; the launch window of the console will start with free online services as a sort of trial run.  After the system has launched and the kinks have been worked out, the service will switch to a paid version.

There hasn’t been a lot said about the online services either, which is a little disheartening so close to launch.  Maybe Nintendo is just playing it by ear, and hopes to adapt as more user data has been collected.  So far they’ve announced that each month online users will be able to play a classic NES or SNES game for free.  Don’t get confused though, you will not own the game.  You’ll be able to play it for the month it is available for no charge, but you’ll have to purchase it after those 30 days if you want to continue.  I really wish Nintendo would just give you the game.  At this point, they are pulling from titles over 15 years old.  If Microsoft and Sony can afford to give away titles that run $20 and up, Nintendo should be able to cough up a free copy of Kid Icarus.

Overall, the Switch looks like a promising console with a few questionable aspects.  The high accessory price and lack of online details make me a bit unsure on how solid the Switch will start off, but I’m confident it’ll perform better than the Wii U.  Only time will tell, but you can always trust us to have quality reviews and articles as the games release.  With the official launch just a little over a month away, we’re as excited as can be to dig into this new Nintendo experience!