If you’ve never played Ninja Gaiden on the NES, there’s only one thing you need to know: the game is very hard.  In fact, classic Ninja Gaiden games are the epitome of speed runs.  The runners make these brutal games look like a cakewalk.  The Pacifist category is even more difficult, as it tasks the runner with completing the game with the minimal amount of kills necessary.  Our runner Gusmancini was able to walk away with a win in this year’s Ninja Gaiden 1 run, so let’s see how he fares with the follow up! 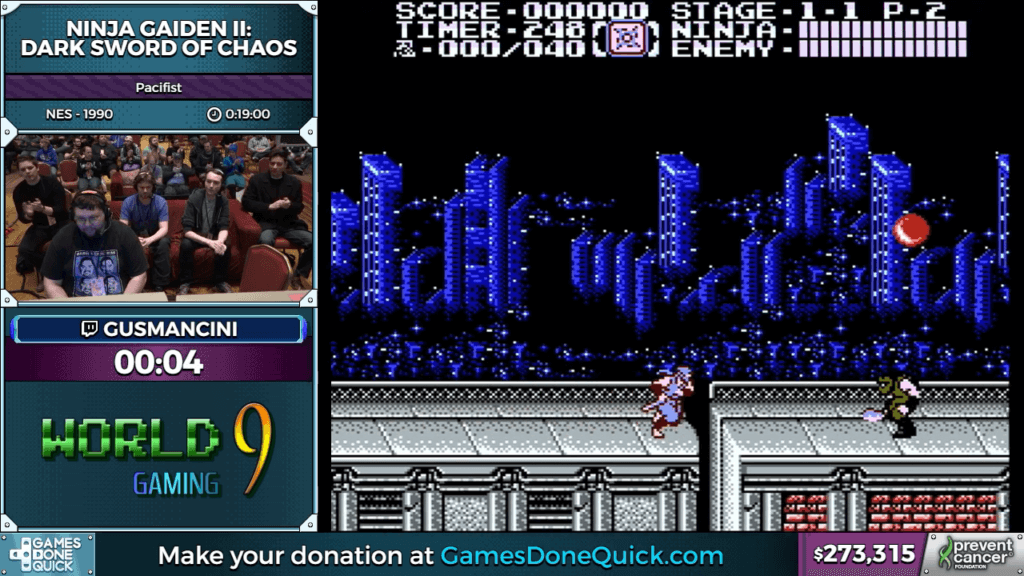 The first thing you’re probably thinking is “how is he gonna dodge all those enemies?!”.  In fact, Gusmancini takes a lot of intentional hits.  He even uses this to boost himself across the level, since hitting an enemy in Ninja Gaiden 2 does not slow down Ryu.  He takes care of Stage 1 with ease, and starts the worst level in Ninja Gaiden II. 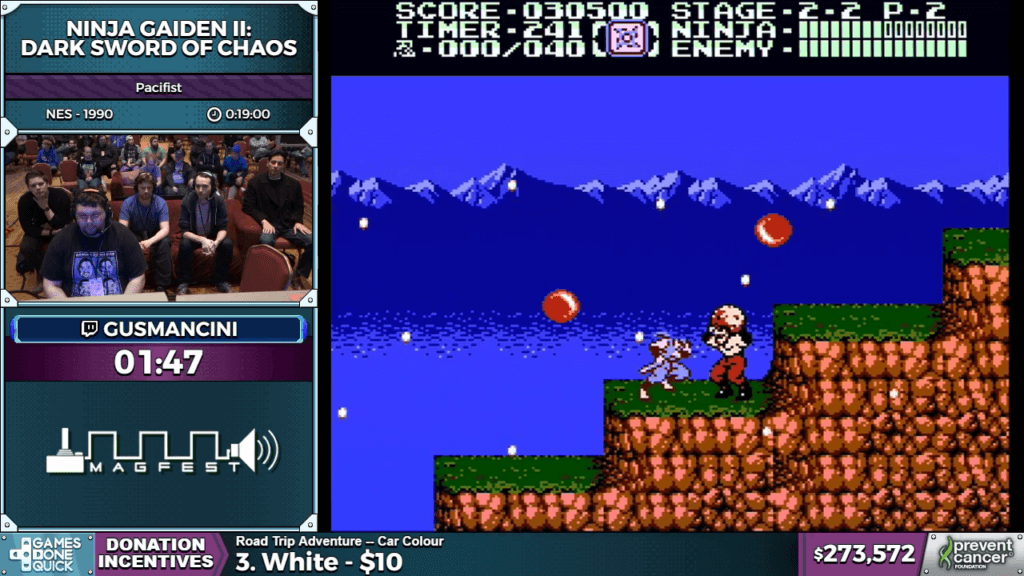 Stage 2-2 features wind that blows back and forth.  It also contains one of the hardest bosses in the game.  Each level features a different environmental aspect, but wind proves to be the most annoying for speed running.  As he goes toe to toe with the boss quite impressively, killing him with taking almost no damage.  This is done by utilizing the “slash cancel”, which involves cancelling the slashing animation mid-attack, which allows you to get another slash in after it.  It allows for almost double the normal damage. 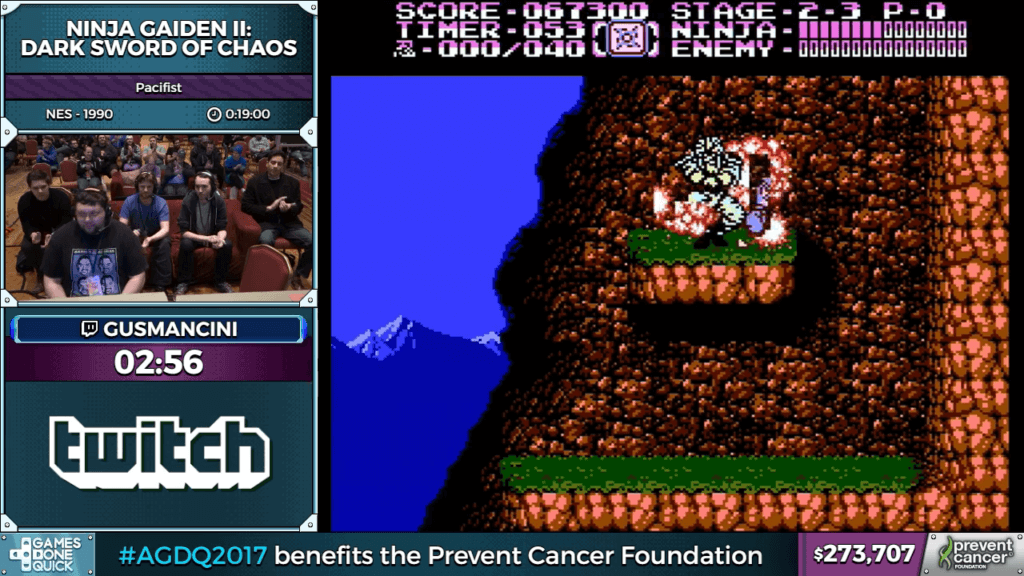 Moving onto Stage 3-1 gives us a look at the “light/dark” mechanic of Stage 3.  However, since speed runners play these games for hundreds of hours, Gusmancini already knows where to go.  It’s actually pretty silly to see him bouncing off enemies like a weird game of ninja pinball.  The Stage 3 boss stands no chance, getting absolutely deleted by the slash cancel. 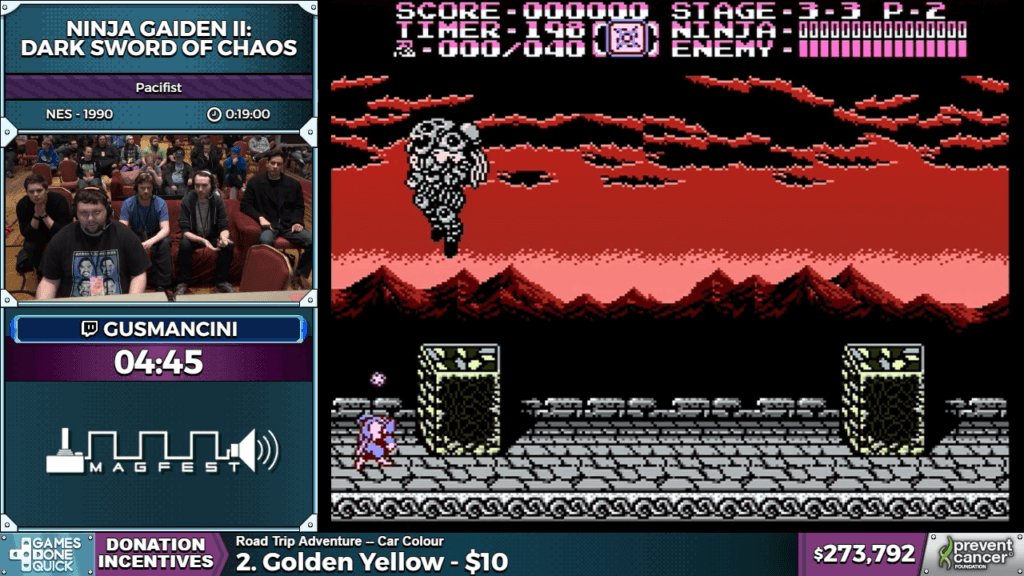 Stage 4 features lava; everyone’s favorite.  In fact, it almost causes Gusmancini a death towards the end.  By barely saving himself, he breezes past 4-1 with relative ease.  4-2 has some waterfalls that push the character around, and it’s where Gusmancini loses his first life.  Although he’s died before in the run, those are intentional deaths to raise his HP.  However, he shows absolute mastery of control by clearing the 4-2 platforming with ease (despite the death). 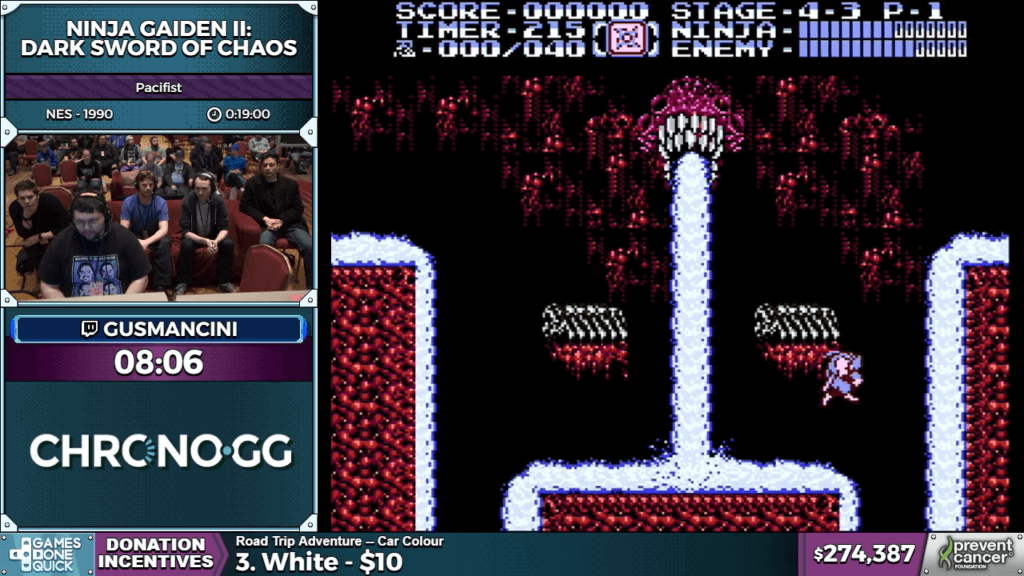 Stage 5 is a mixture of spikes and more lava.  It’s one of the hardest levels in the entire run, and shows off an interesting glitch.  By using a damage boost, Gusmancini passes through a wall and ends up in the ice section of Stage 5, skipping some annoying obstacles.  The ice section has Gusmancini showing off some awesome movement tech.  By jumping into enemies at the correct angle and with the right timing, he uses the reel back from the damage like another platform.  This allows him to make unintentionally long jumps. 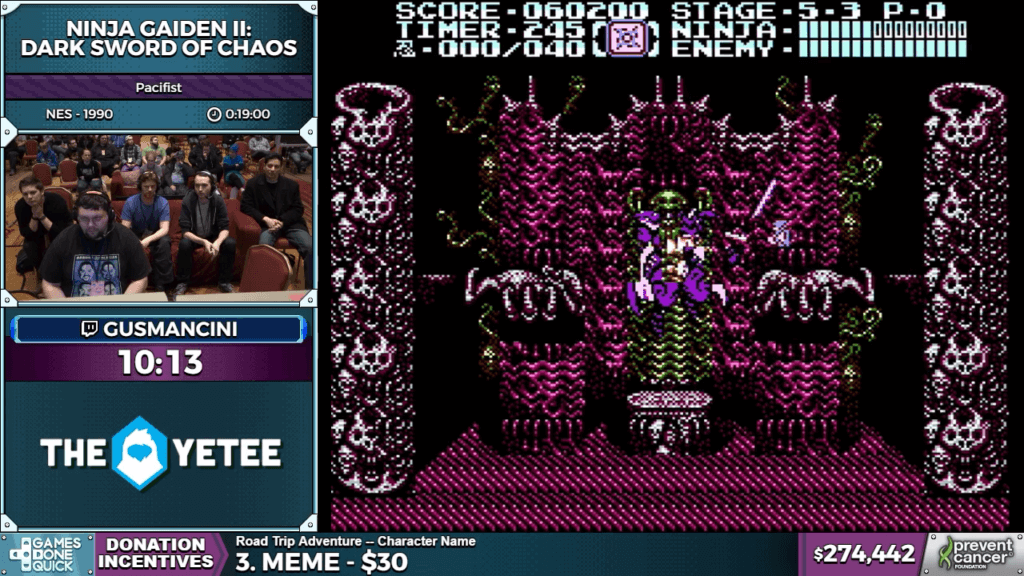 The stage 5 boss can be pretty tricky, with some projectiles causing quite a bit of trouble.  However, Gus manages to defeat him with ease.  Stage 6-1 is considered a slower and less stressful area, which Gus uses as a breather.  The entirety of stage 6 proves to only have one stressful moment, in which a rogue bird almost causes an unintentional death.

Stage 7 is absolute insanity when it comes to enemy placement.  There’s just way too many enemies on screen, and Gus accidentally kills an enemy with a shuriken.  Usually he exhausts these while wall jumping, to avoid accidental enemy kills.  Despite this, he weaves through a plethora of birds, projectiles, and enemies. 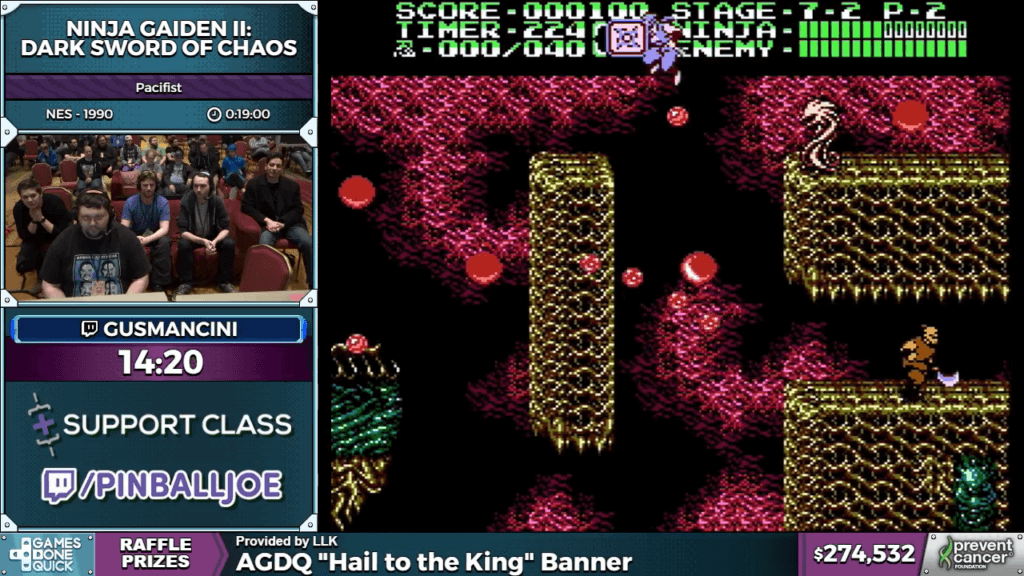 We arrive at the last boss.  The first form is easy street, as is the second.  Phase three is difficult, due to the amount of projectiles.  As a rule of thumb, boss projectiles actually do more damage than the boss themselves.  This is true for the third form.  The final boss is no match for Gusmanicini’s sword skill though, as he fillets the grotesque monstrosity with finesse. 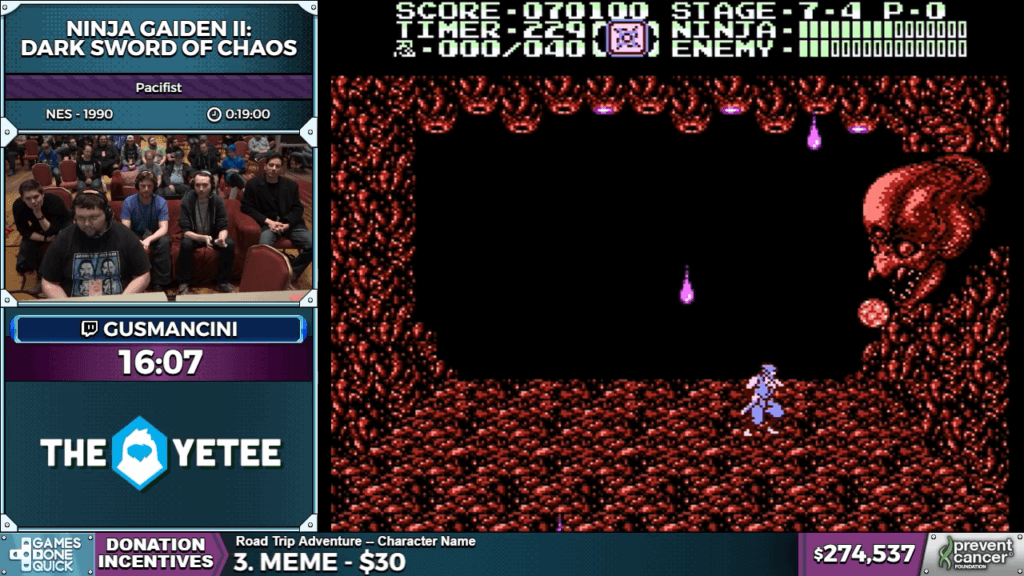 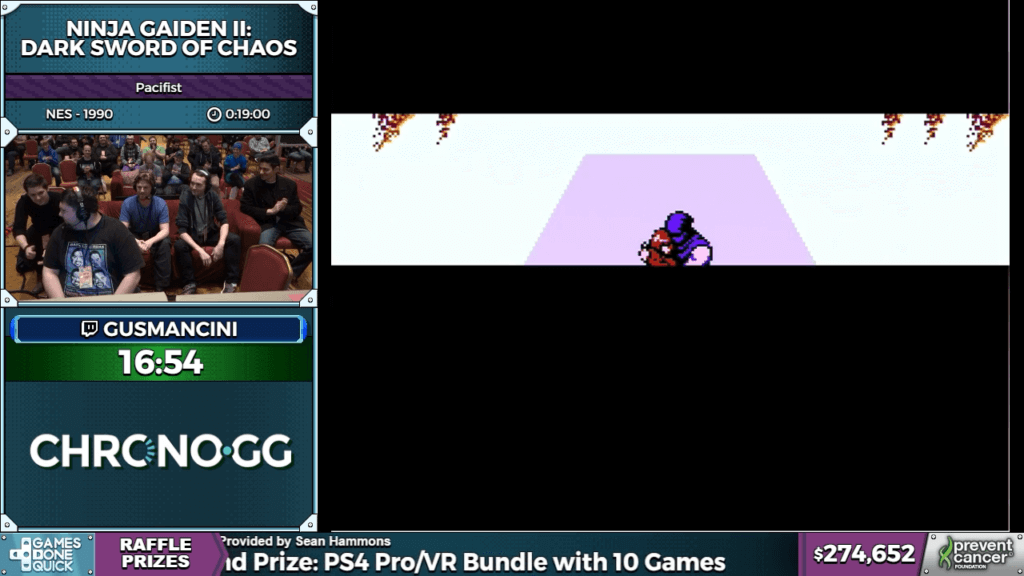