One of my favorite parts of GDQ events is being introduced to new games.  While Mickey’s Dangerous Chase isn’t new by any stretch, I’m not overtly familiar with it, so recapping this run should be pretty fun.  It’s not uncommon that runners speed run silly games in addition to their main games.  It was also not on the original schedule, and was a donation incentive run.  All these things combined lead me to believe that I’m not about to witness a gaming masterpiece. 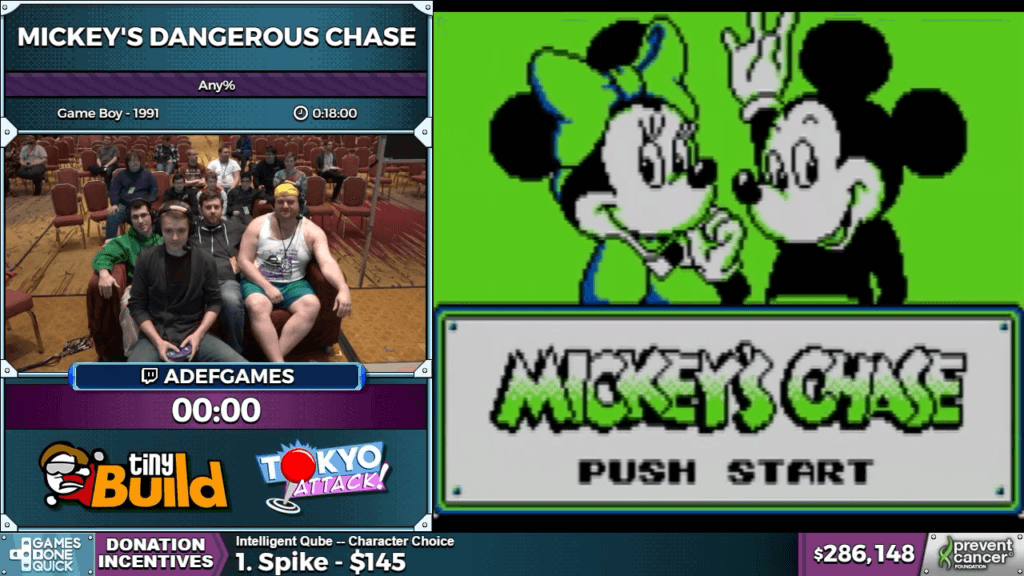 The game starts in Mickey’s Hometown, although the runner is playing as Minnie Mouse.  The game is basically like Chip n’ Dale Rescue Rangers for the NES.  Minnie picks up blocks and throws them at enemies, and that’s pretty much it.  Visually, this game looks pretty bad.  The screens speak for themselves; this isn’t winning any “Graphics of the Year” awards.  Turns out, there’s actually no known glitches in the entire speed run, which is unexpected for such a random game.  Often times these sillier games are ripe with glitches.

That’s no big deal though.  After all, this is AGDQ 2017. We’re looking at pure Mickey Mouse skill. 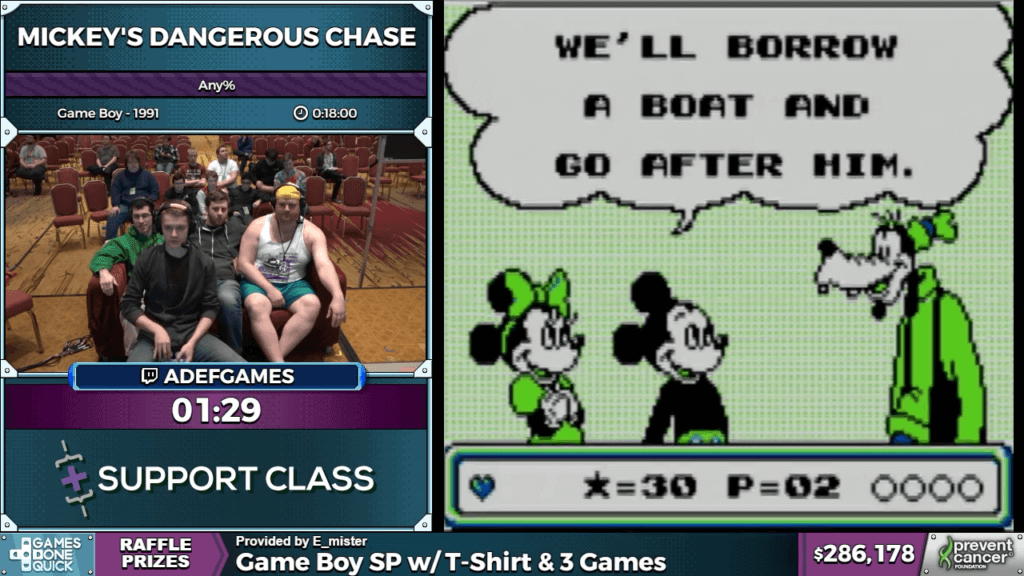 At the end of every level, Goofy greets us upon completion.  Other than that, you would never guess this is a Mickey Mouse game.  Enemies range between snakes, and even bears (pictured below).   It’s an eclectic mix of platforming, block throwing, and Goofy greeting. 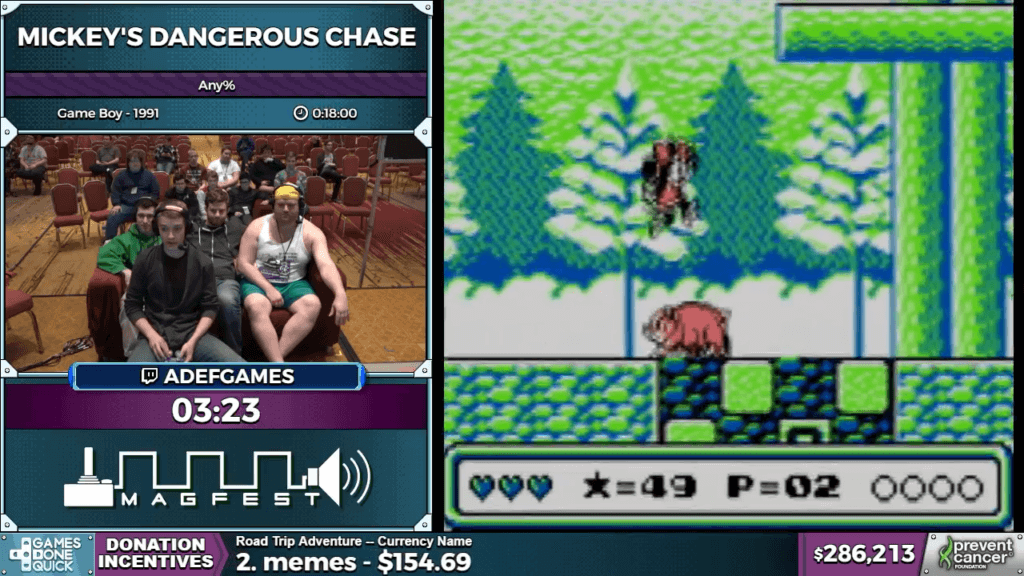 Stage three is a mountain, and it’s where the game starts to add tons of spikes.  After the runner fails a quick jump twice, I start to realize just how difficult Mickey’s Chase is.  For a Disney produced children’s game, I don’t see any kid beating this game with ease.  Then again, I was pretty dang good at Mega Man 2 back in the day, so…

I digress.  There’s some light puzzle elements in the fourth stage, with Adefgames having to navigate some block obstacles.  He’s actually pulling off some pretty precise movement, grab items in mid-air and damage boosting here and there.  It’s obvious that he is having a fun time, though.  If there was any uncertainty before, it’s been cleared up.  No one thinks this is a great game, we’re all here for fun.  This is probably the best game to be running at 3 AM. 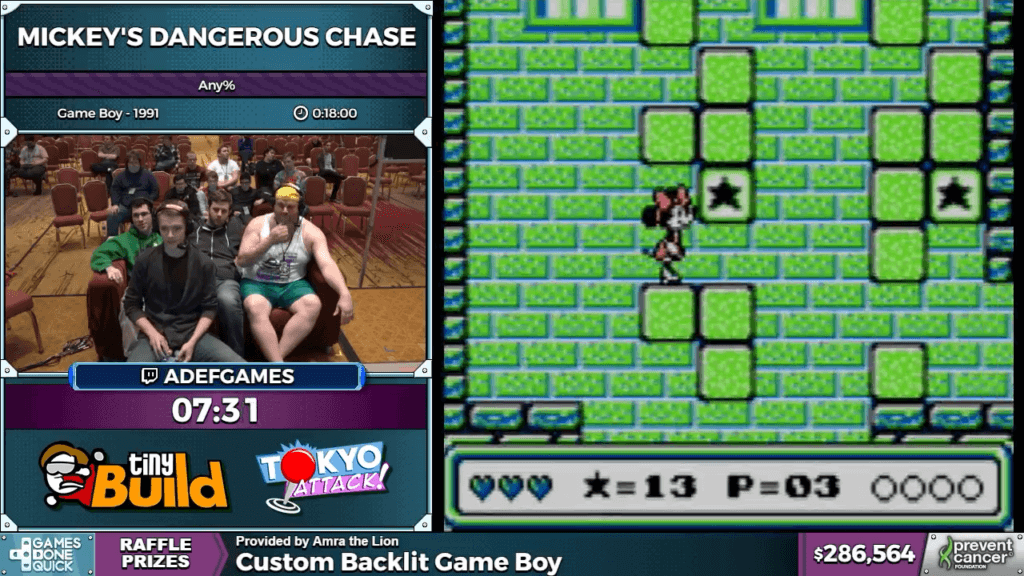 Stage five takes place in the city, and has a ton of falling blocks and spike dangers.  The latter part of the stage also features a scrolling screen, which is ridiculous considering the size of the screen.  I feel like this game would’ve functioned much better if they would’ve pulled the camera back a bit.  Adef agrees as he takes on the final boss.  By chucking the correct bricks in the correct order directly at the boss’ head, Adefgames secures a great final time.  In fact, it’s a personal best for him, beating his previous best time by 15 seconds. 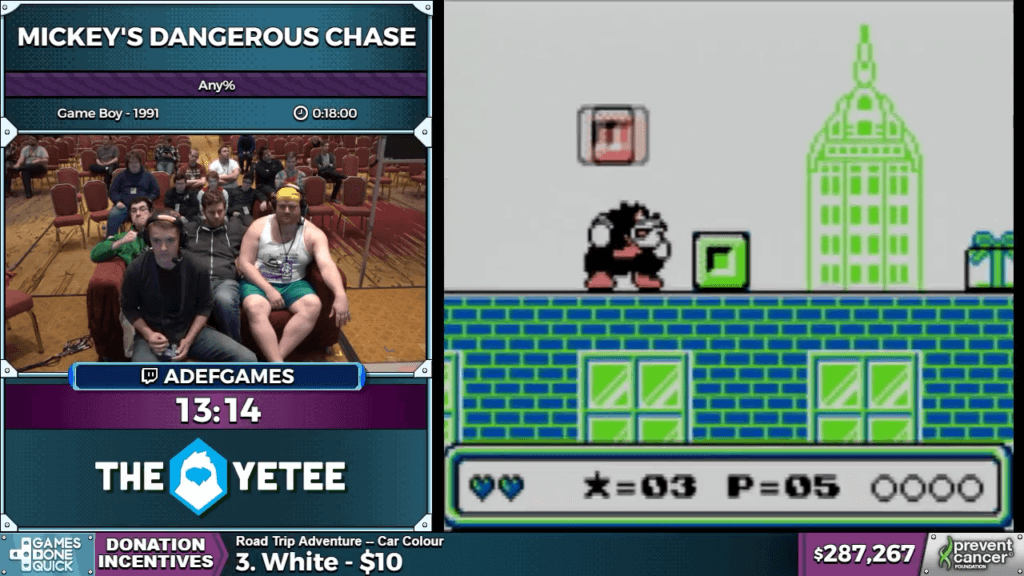 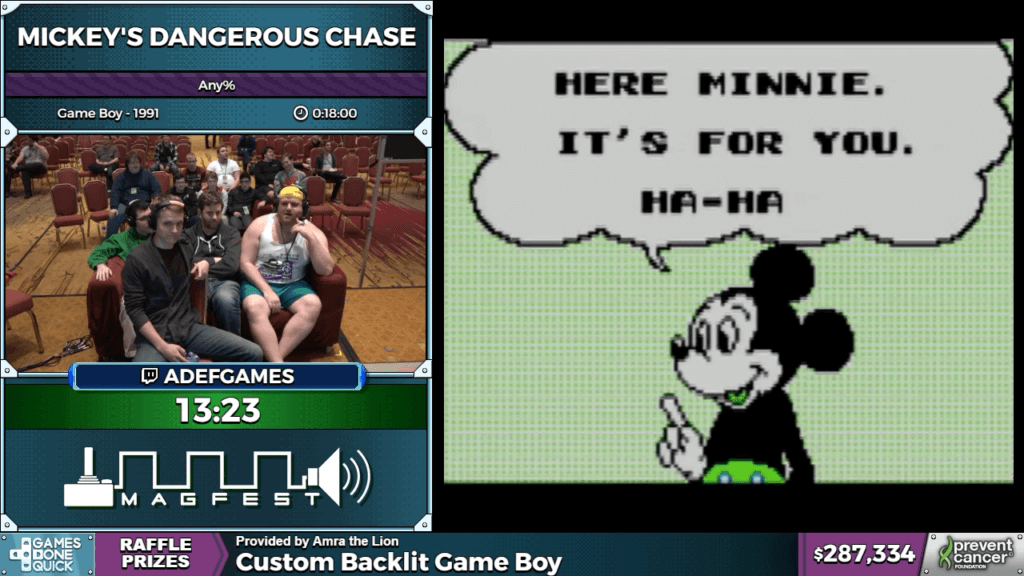