Before I start covering the race, I just want to welcome you to NintendoStar’s AGDQ 2017 coverage!  If you want to check out the entire schedule, it’s right over HERE.

As we pull into Sunday night of AGDQ 2017, it’s time to revisit a classic.  The Mega Man franchise is pretty popular among the speed running community, but most of the 4 Man Races have been done with Mega Man X.  While that’s still on the table, it’ll be refreshing to see some classic blue bombing going on. 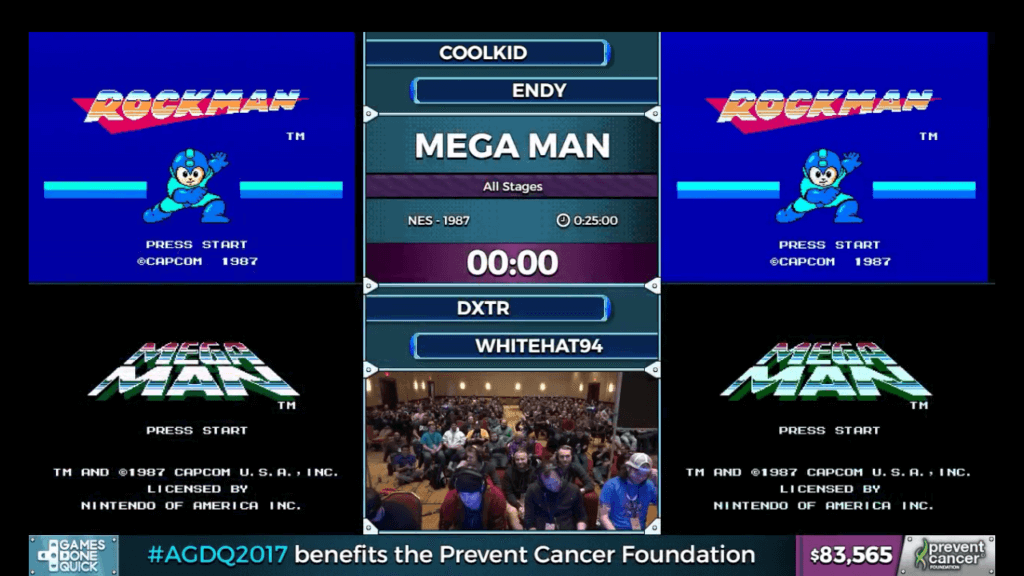 Just as a precursor, these four speed runners are the only gents who have beaten the game in under 19 minutes.  Coolkid holds the current record, so we’ll be interested to see where the cards fall.

As the race starts, everyone starts with Cut Man.  This is to get the magnet beam item early, which will allow for plenty of tricks.  Within the first minute, there’s already tons of tricks going on.  WhiteHat has already utilized the pause trick, which allows you to easily run through enemies without taking too much damage. 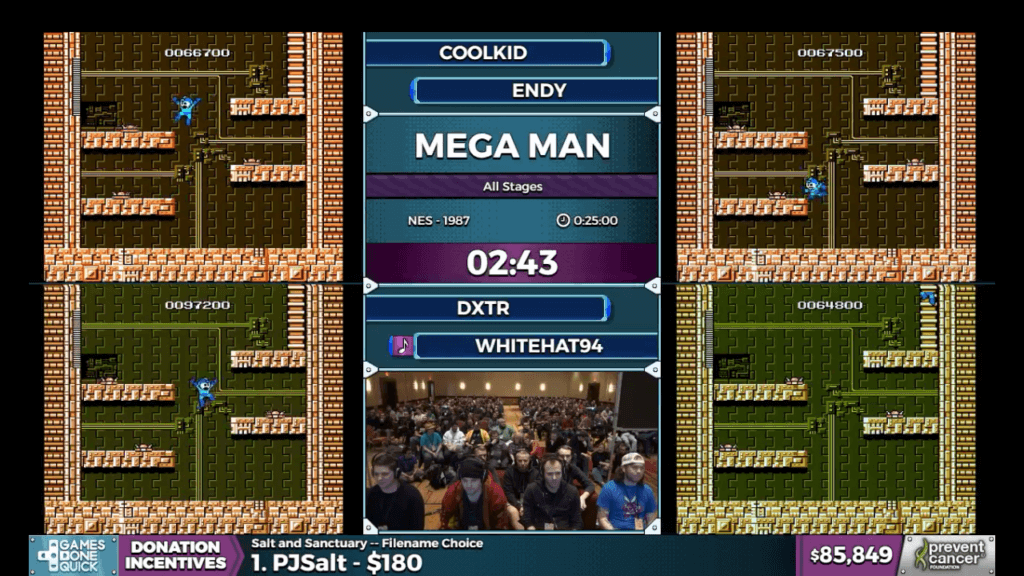 All four runners take down Cut Man with ease.  WhiteHat takes a small lead into the next stage, Elec Man.  Here’s where we find the magnet.  Using a glitch that plays off the NES hardware, the runners attempt to use a ladder and very precise movement to “zip” across the screen and access the magnet beam before intended.

All of the runners get it except for Endy, who messes up the trick.  Unfortunately, if you mess this one up… it means a reset.  With Endy seemingly out of the race after only the first stage, it’s most likely down to three runners. 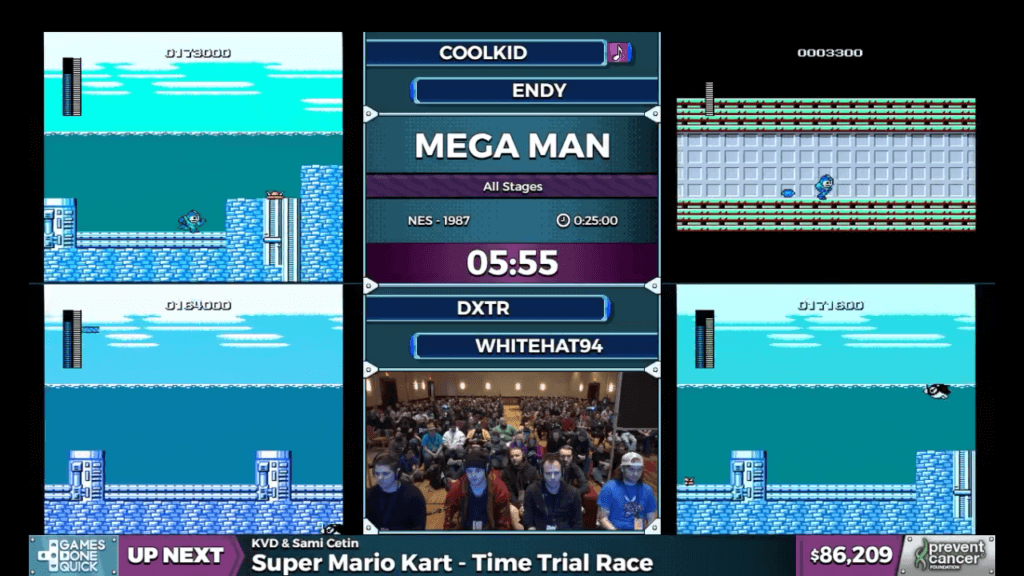 Moving onto Ice Man’s stage, all three runners are neck and neck.  Utilizing the magnet beam, they “zip” across the stage by getting frame perfect inputs.  In fact, the magnet beam is absolutely dominating this run.  Ice Man proves to be no problem for either of our three runners, as they move onto Fire Man.

Fire Man seems to be a bit more of the same, but with the introduction of “wraps”.  “Wraps” allow you to hop through walls and skip entire sections of the game.  Fire Man repeats much like Ice Man, but CoolKid misses a late-stage wrap.  As he falls behind, the rest of the runners clear Fire Man with ease and move onto Bomb Man.
Bomb Man’s stage is a bit difficult, with tons of spikes and hazards.  However, utilizing the magnet beam, the runners continue to run atop the screen avoiding most of the obstacles with ease.  Bomb Man stays pretty relaxing, with Dxtr gaining a bit of momentum. 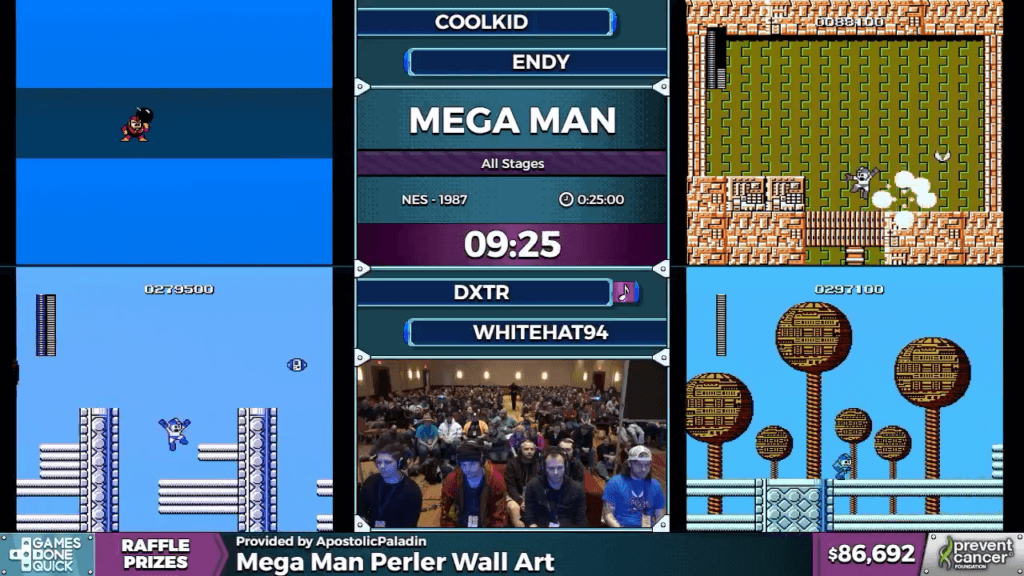 Gutsman’s stage has a very important trick during the boss fight.  While the stage itself isn’t difficult, missing the trick with the boss will force a reset.  that means huge time loss.  Luckily, all three runners manage to grab it.

Here’s where things get hairy.  With only 12 minutes passed, it’s onto the home stretch with Wily’s Castle stages.  For those who remember the big yellow blob that would dissect himself, you’ll be happy to know that by pausing the game with Elec Man’s ability, you can destroy him in seconds.  All three runners manage this, and continue towards the boss rush. 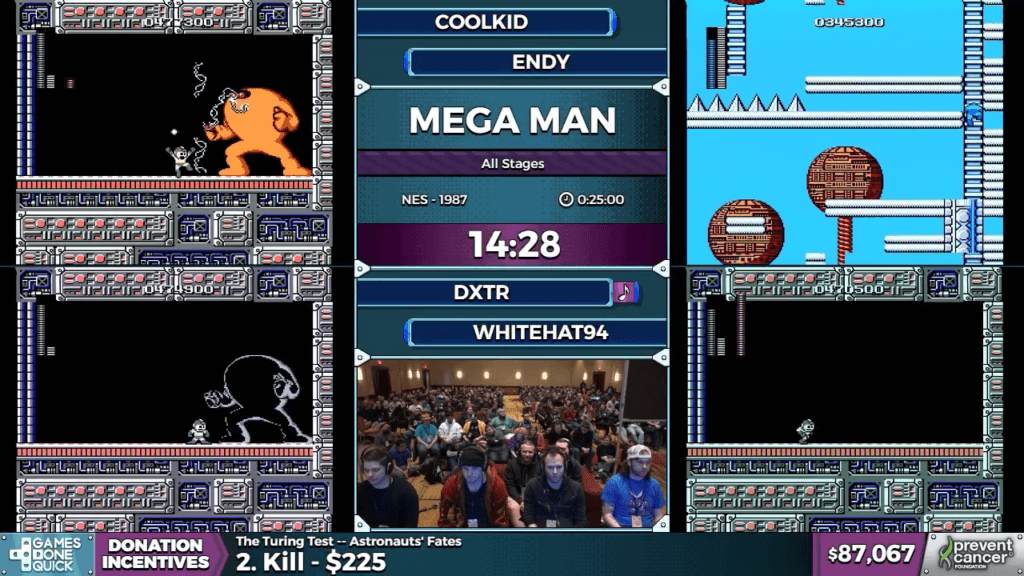 Here’s where things get technically insane.  I’m going to be honest here, it’s pretty hard to watch all three screens and accurately see all the tricks.  However, all three runners are utilizing frame perfect zips to get to the boss rushes as quickly as possible.  Although there’s a few missed attempts, all the runners manage to get through.  The bosses stand no chance against the absolute mastery of the runners’ ability. 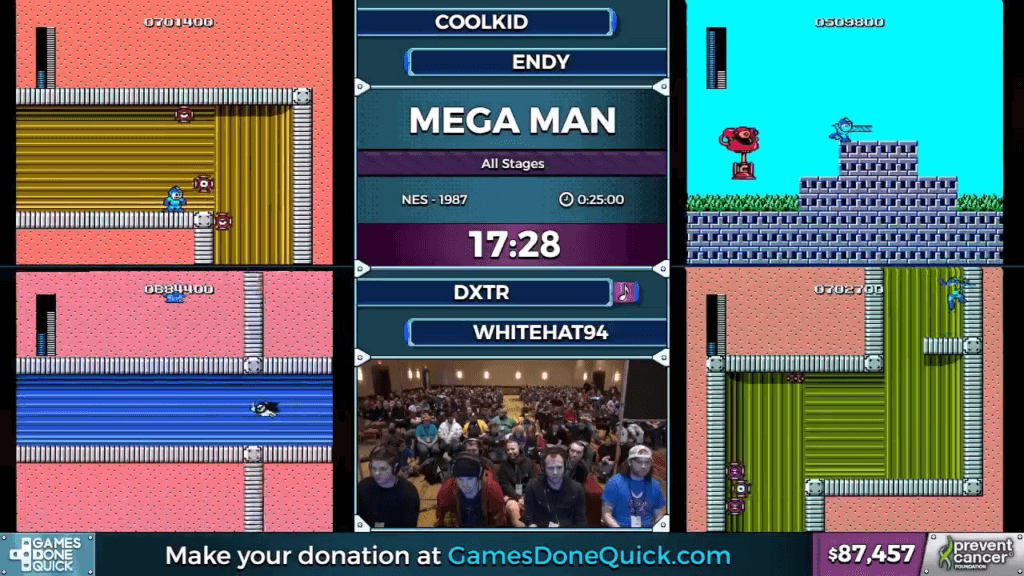 The next few Wily stages get absolutely destroyed by the runners hopping out of bounds and skipping the almost entirety of the stages.  It all comes down to the final boss.  While not a super difficult final boss, the pressure is on due to the clock.  No one has ever achieved a 19 minute completion time at an AGDQ event.  However, with finesse that proves their mastery of Mega Man, all three runners end up beating the game with a 19 minute time. 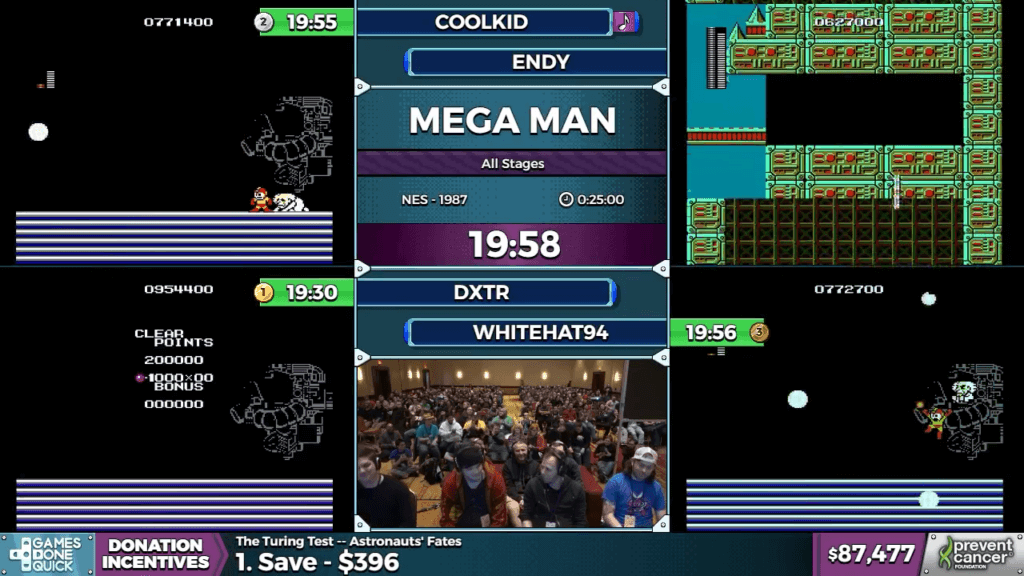