The NES had many games, and a lot of them were sidescrollers.  Kabuki Quantum Fighter fits neatly into that category, and continues our coverage of AGDQ 2017!  Developed by Human Entertainment and released in North America in 1991, Kabuki has a pretty out there set up.  The protagonist, Colonel Scott O’Connor transfers his brain into a computer in order to fight a virus.  Taking on the image of his ancestors, he becomes the Kabuki Fighter and attempts to save the world.  Mithical9 is going to beat it in 15 minutes, so I doubt we’ll be able to see any story play out.  However, it’ll be an entertaining run for sure. 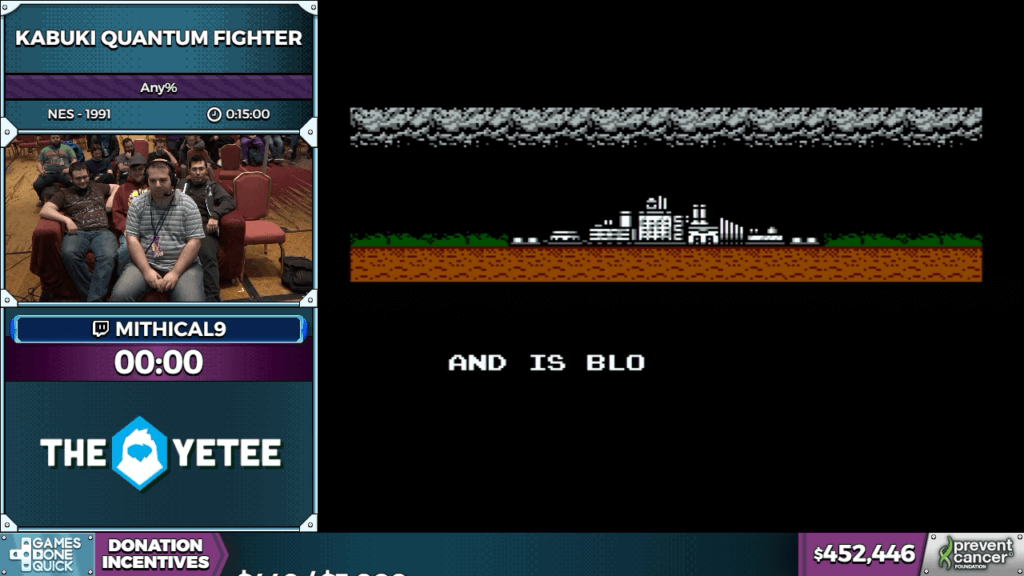 The game seems to be broken up into “rounds”, so with Round 1 underway, Mithical is off to a blazing start.  Right within the first 20 seconds he pulls of a frame perfect grab on a ladder.  That’s a 60th of a second time frame window.  Mithical blazes right through the first round, and moves onto the first boss, a purple jumping monster. 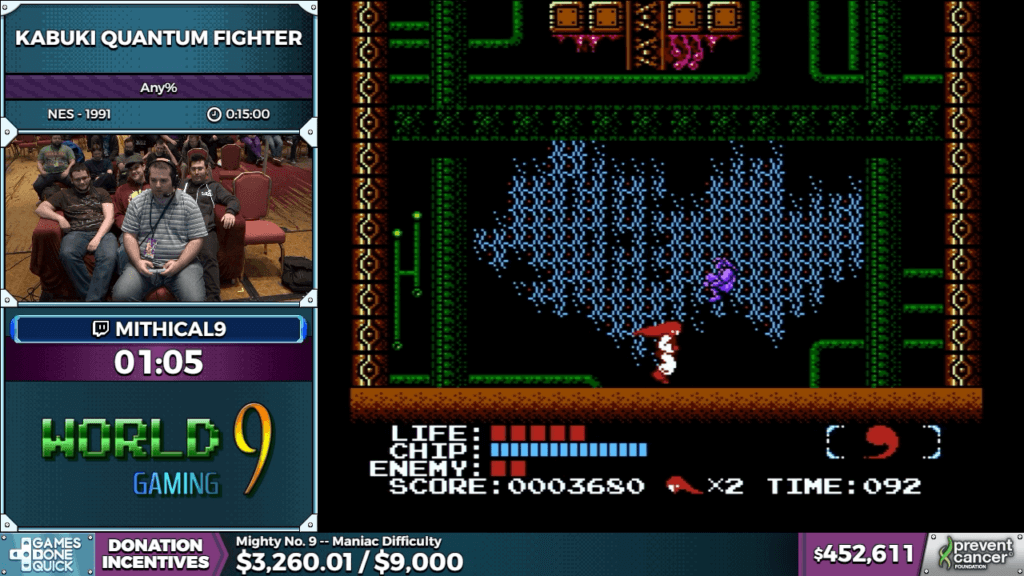 He’s on screen for less than 10 seconds.  It was nice to see him go.

At the end of each boss, you get a sub weapon.  Hopefully we’ll see some of those shown off.  Round 2 starts off, and it’s a sewer level.  Although sewer levels are usually pretty bad, but Kabuki Quantum Fighter seems to have pretty neat level design.  There’s a few floating platforms that the Kabuki spins around on. 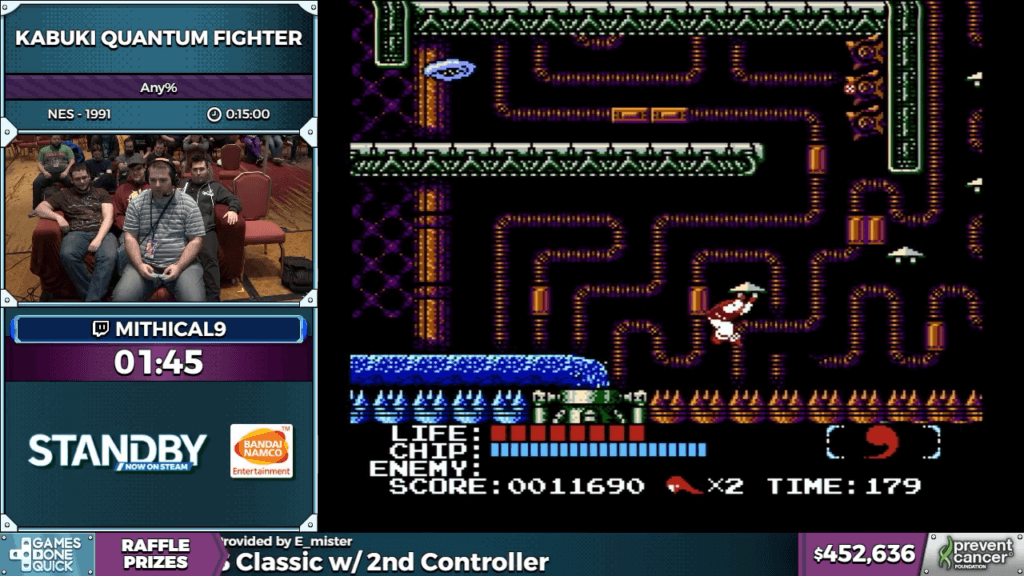 Mithical approaches the second boss, a jump kicking enemy similar to the purple boss before.  With no easy strategy, Mithical hurls fire at him until he reaches his demise. 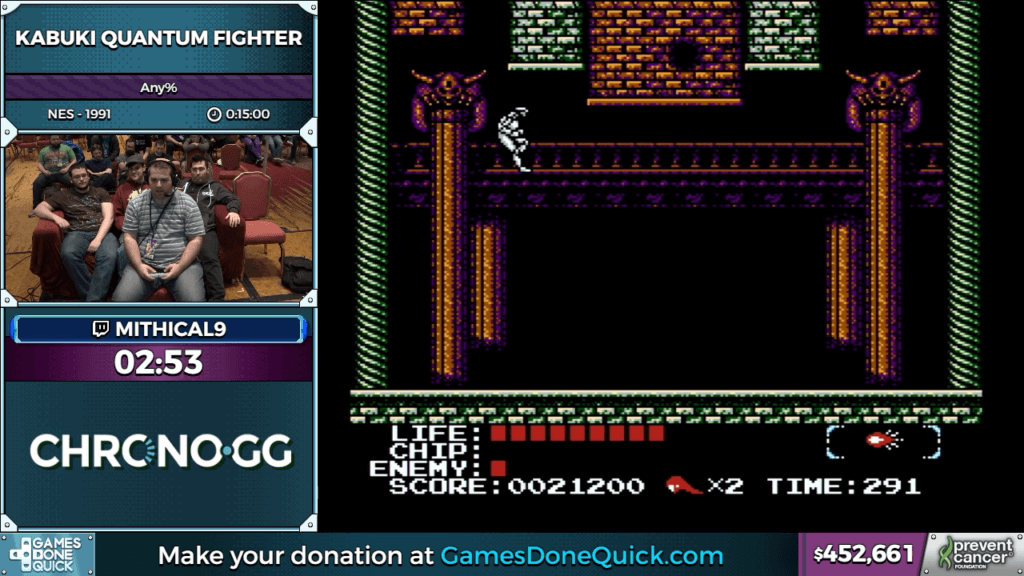 It’s onto Round 3, which looks like a electronic Mega Man level.  There’s ice physics, of course, which give Mithical some problems with enemies along the way.  Damage boosting on ice is super quick though, but is only used in Round 3.  Unlike Ninja Gaiden, you have a bit more health.  However, the game doesn’t seem easy by any means. 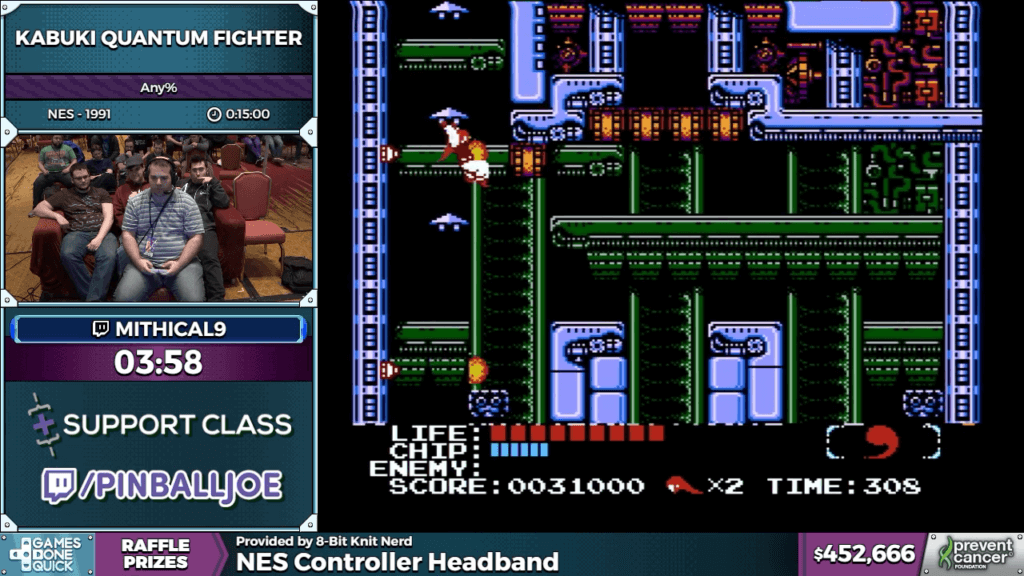 The third boss gets pushed over easily.  He reminds me of a piranha plant from Super Mario Brothers, except with tentacles. 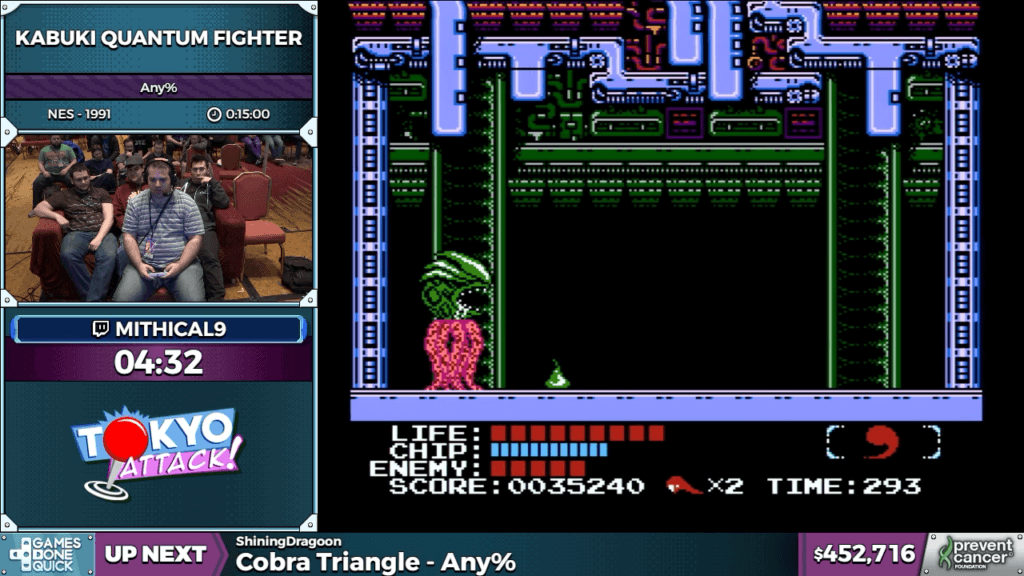 The fourth level isn’t terribly interesting, with no major glitches or skips.  Mithical bounces around the level quickly, looking like an acrobat as he jumps from platform to platform.  The fourth boss isn’t the easiest, but still gets defeated with ease.  He’s barely on screen long enough to get a good look, but is essentially a four legged robot. 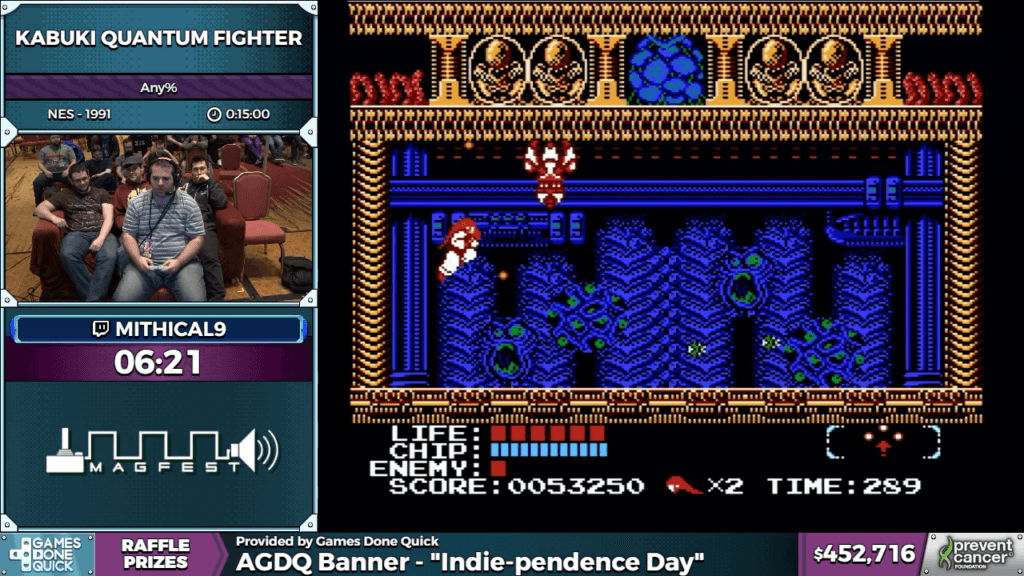 Round 5 is a dark red stage with some conveyor belts.  Spikes protrude from the ceiling, with floating spike enemies littering the screen.  Mithical makes it through easily, as he approaches the second part of Round 5.  This is considered the hardest part of the speed run, as he focuses in.  It’s a vertical area with some pretty tight jumps.  Think original Metroid, and you’ve got a good idea. 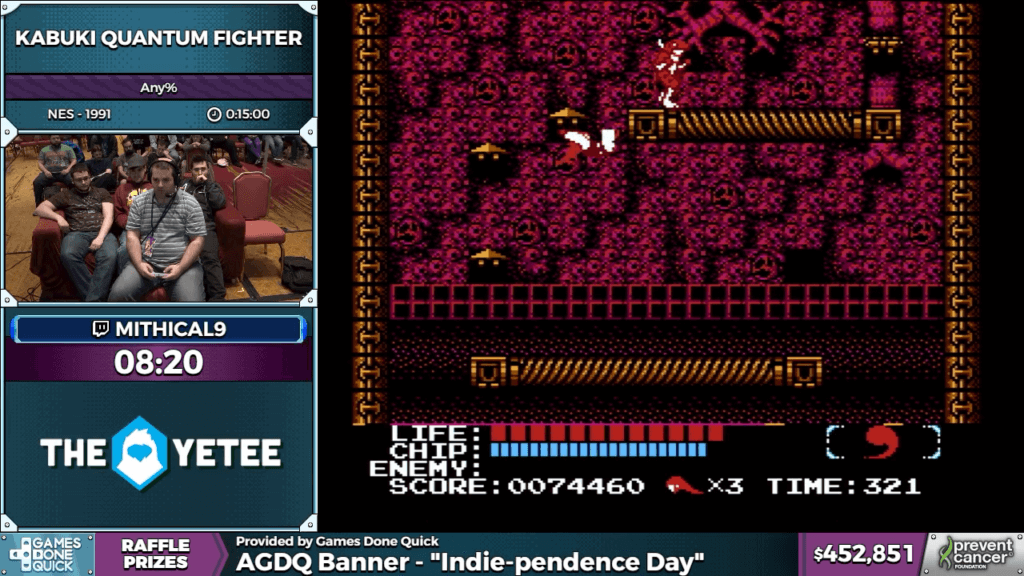 He attempts a damage boost that can soft lock the game.  Soft locking the game will require a reset.  However, the speed run gods shine down and the game continues without a hitch.  Kabuki Quantum Fighter is a good looking game, from everything I’m seeing here.  Tons of style, and some really good animation to boot.

The penultimate boss is huge.  In comparison to the rest of the bosses of the game, this robot towers over the Kabuki.  However, Mithical jumps on his head and dispatches him quickly. 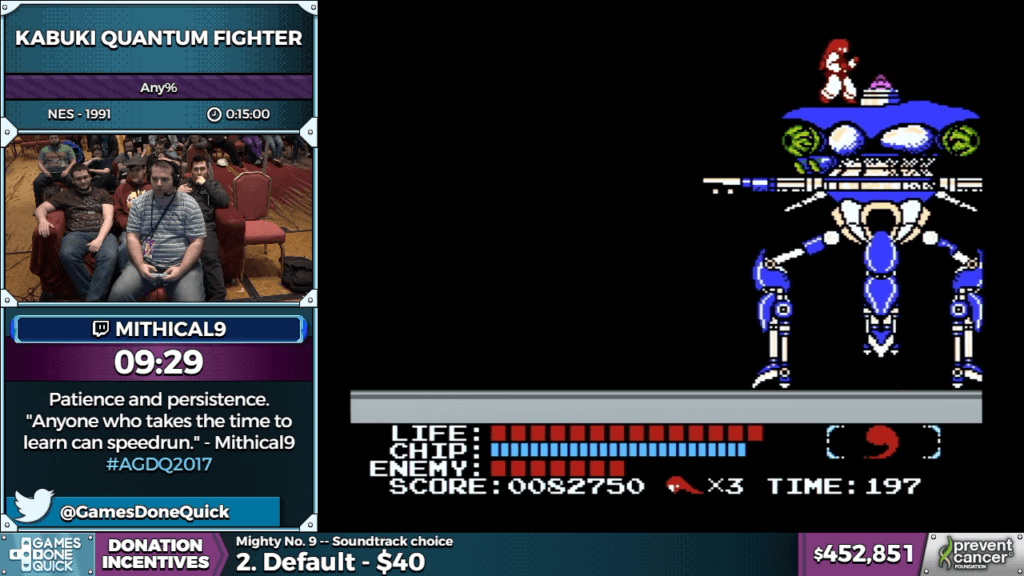 Round 6 ejects the Kabuki into space, where the final boss fight takes place.  Showing off a feature of the game, Mithical trades some of his life for ammo, and shoots explosions directly at the bosses face.  After taking down his first form, he repeats with the final form.  In a swift blink of an eye, Kabuki Quantum Fighter comes to a close. 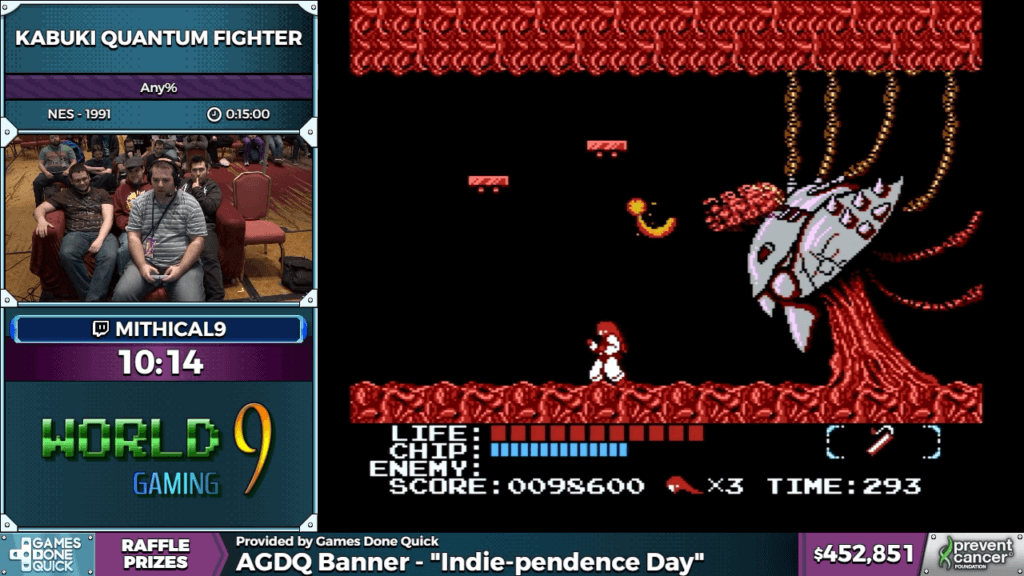 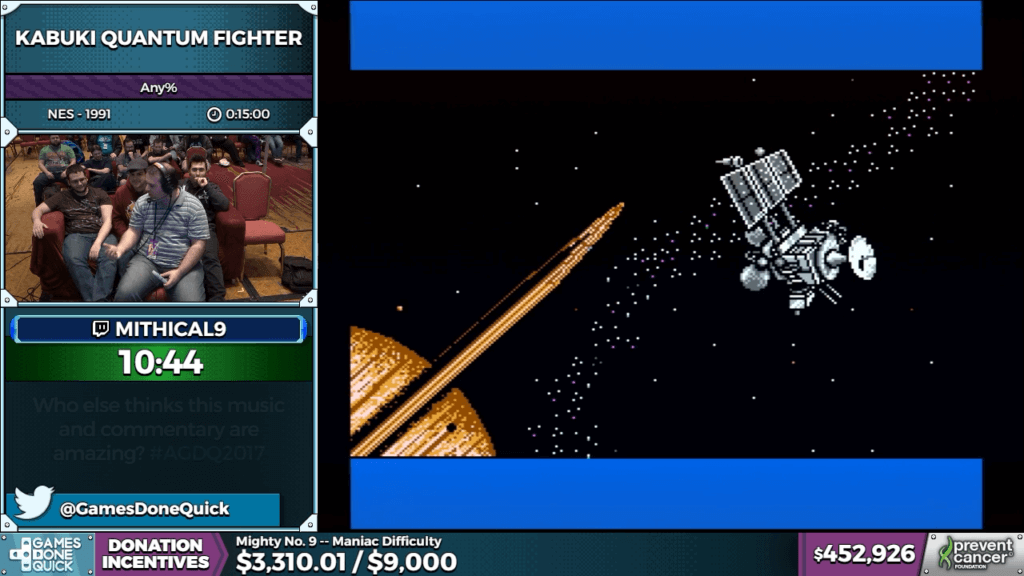