Most people remember RARE for their Nintendo 64 releases.  Games like Perfect Dark, Conker’s Bad Fur Day, Diddy Kong Racing, and Donkey Kong 64 stand out among those.  However, NES owners will fondly remember the 1989 racing action game, Cobra Triangle.  If you’ve never tried Cobra Triangle, it’s pretty easy to find.  It was recently included on the Xbox One compilation, “Rare Replay”.  ShiningDragoon returns after his Blaster Master race, and plans on beating it in under 20 minutes!  Having played it myself and struggled with some of the early challenges, it’ll be awesome to see him absolutely destroy it! 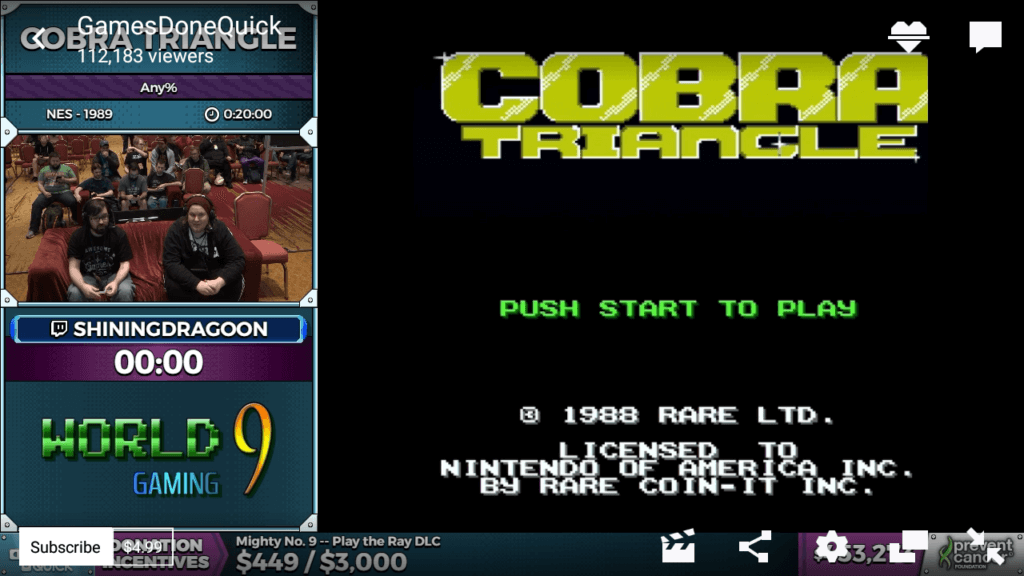 ShiningDragoon is back, and it’s time for Cobra Triangle.  Cobra Triangle is broke up into stages, and most of them fly by pretty quick.  For formatting, I’ll break down the run stage by stage, and note if anything important or exciting happens.

Stage 1 teaches you the basics, shooting enemies and gaining points.  You can get drops off of enemies to get some power ups.  He beats it quickly, and moves onto Stage 2.

Stage 2 has the player collecting pods, and ejecting from ramps.  Shining grabs some ammo power ups, which spreads out his shots.  Much like Contra, spread shot turns out to be the best in the game. 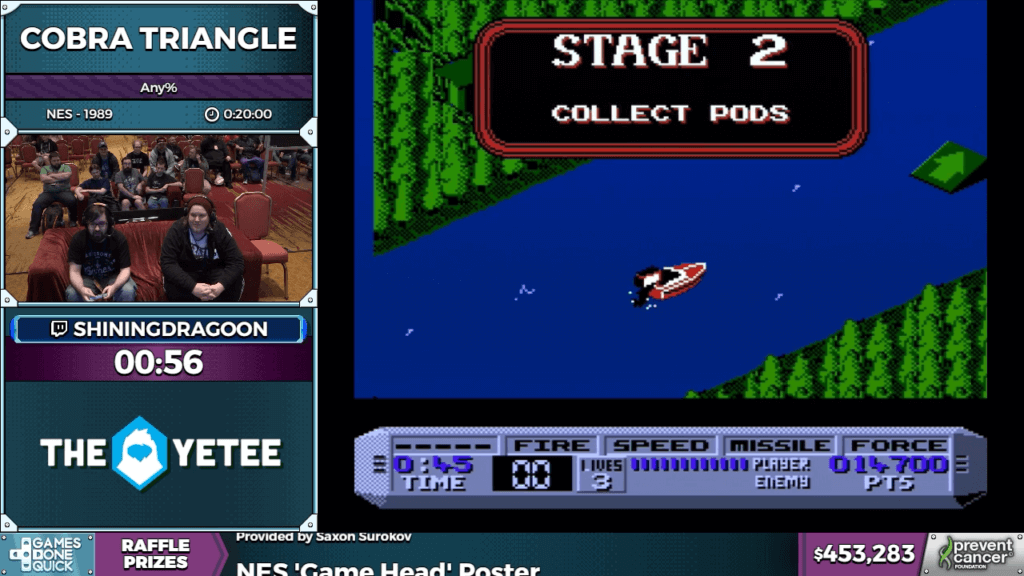 Stage 3 has the player disposing of mines.  By grabbing mines from the starting area and depositing them in a safer area, players avoid enemy ships that try to steal them back.  Shining loses some time to an annoying enemy, but clears the stage quickly.

Stage 4 is a simple race to the finish, which Shining handles in style.  Dodging whirlpools and floating logs, he moves onto Stage 5.

Stage 5 is a sea monster boss.  Shining defeats him in under a second.  He isn’t even on screen quick enough for me to get a picture. 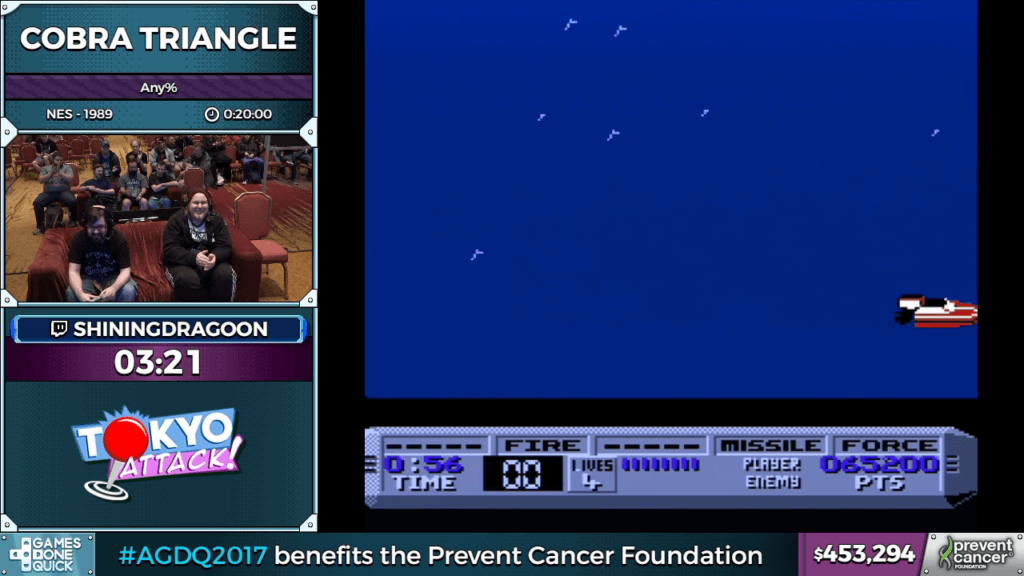 Stage 6 and 7 are a bit of more of the same.  Stage 7 has you saving swimmers from enemy ships.  It’s essentially the inverse of Stage 3.  Despite being a speed runner and having total mastery of the game, Shining admits to having never saved all of the swimmers. 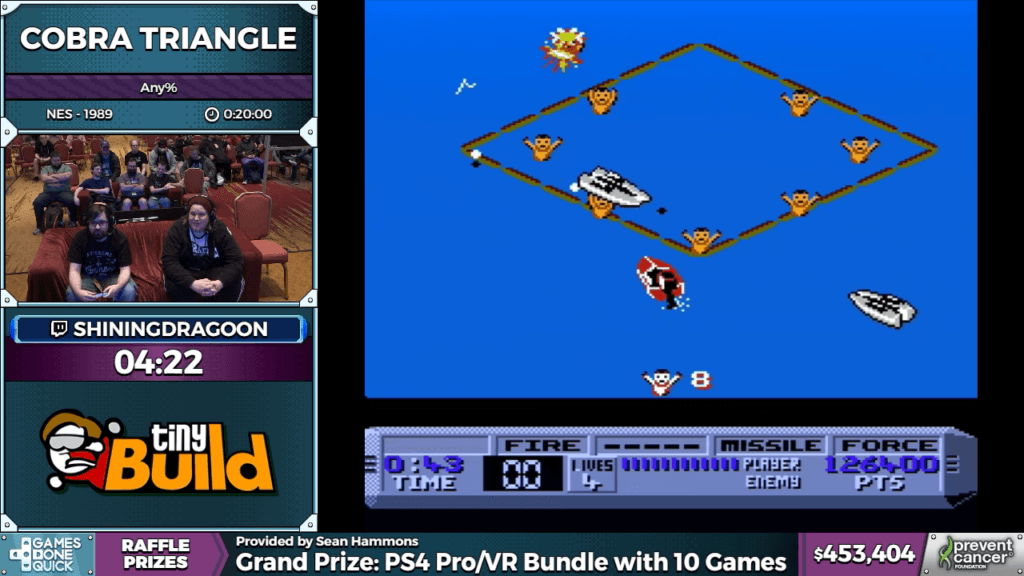 Moving onto Stage 8, Shining jumps a waterfall with ease.  However, as he approaches the finish line, he dies.  The game disregards this, and continues him onto Stage 9.

Stage 9 is another race to the finish, with enemies slamming into the player and trying to push them off track.  This is where Shining takes his first death of the run.  I don’t want to understate this, Cobra Triangle is a hard game. 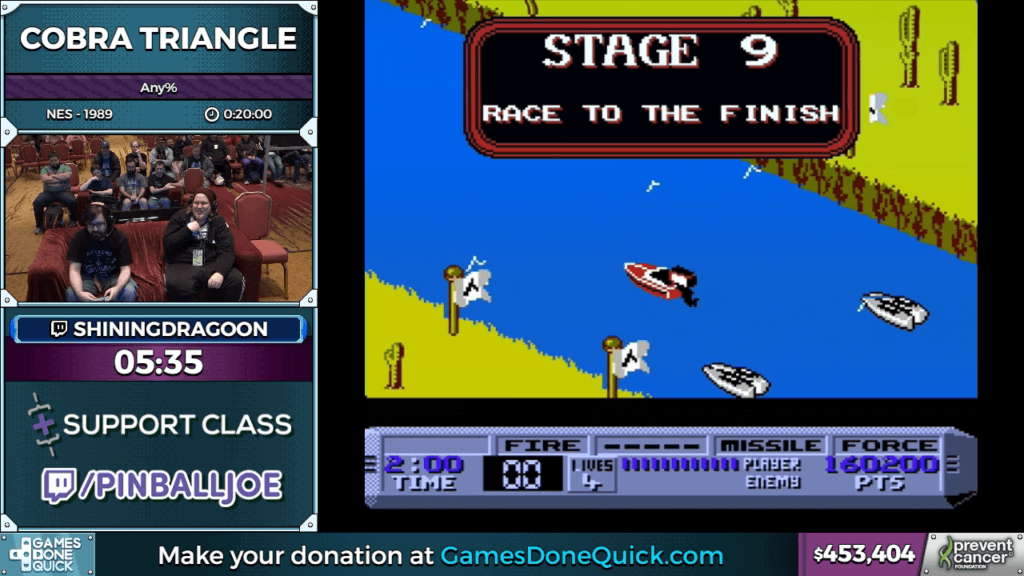 Stage 10 is another monster.  Instead of a normal sea monster, we get a giant crab.  The crab sticks around long enough to take a life away from Shining though.  He regains this in the next Bonus round. 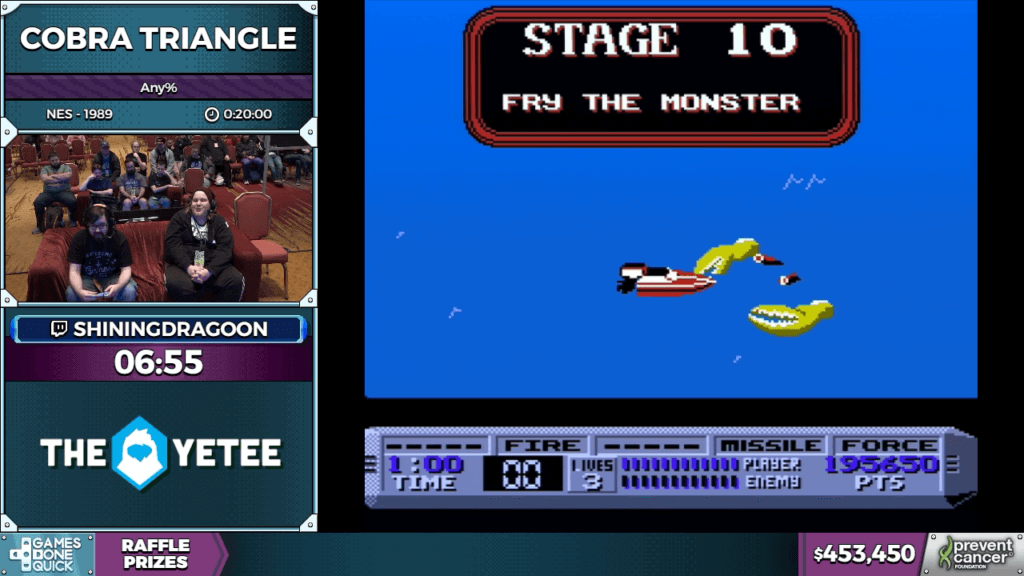 Stage 12 is a super annoying race on an icy path.  It provides a little bit more trouble for Shining, with icicles constantly popping up and pushing him away from the goal.

Stage 13 is an icy version of Stage 3.  There seems to be a certain rhythm that Shining is utilizing, swaying away from enemies at the last second. 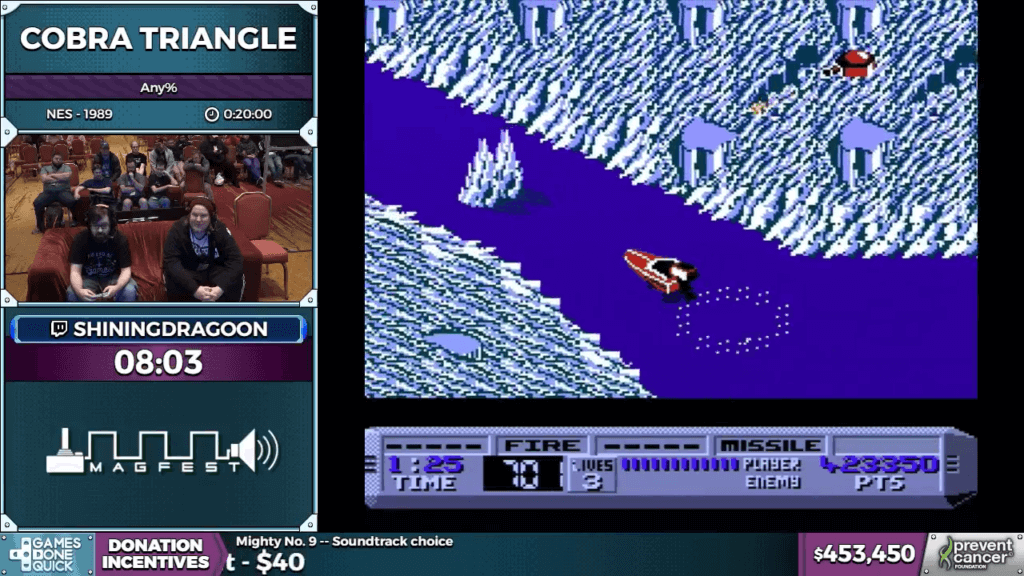 Stage 14 is another icy race to the finish.  This one doesn’t feature too many icicles though, substituting them for giant ramps that shoot Shining super long distances.  It’s actually a copy of an earlier level, just with an ice theme instead.

Stage 15 is another pod collecting level, but with bombs floating around.  After upgrading his gun, Shining hugs the bottom of the screen and continues with ease.

Stage 16 is another “guard the swimmers” area.  Instead of guarding the areas the swimmers are in, Shining sits right by the enemy spawn point and spams his attack.  This confuses the A.I. of the game, so he has to seek them out and finish up the level. 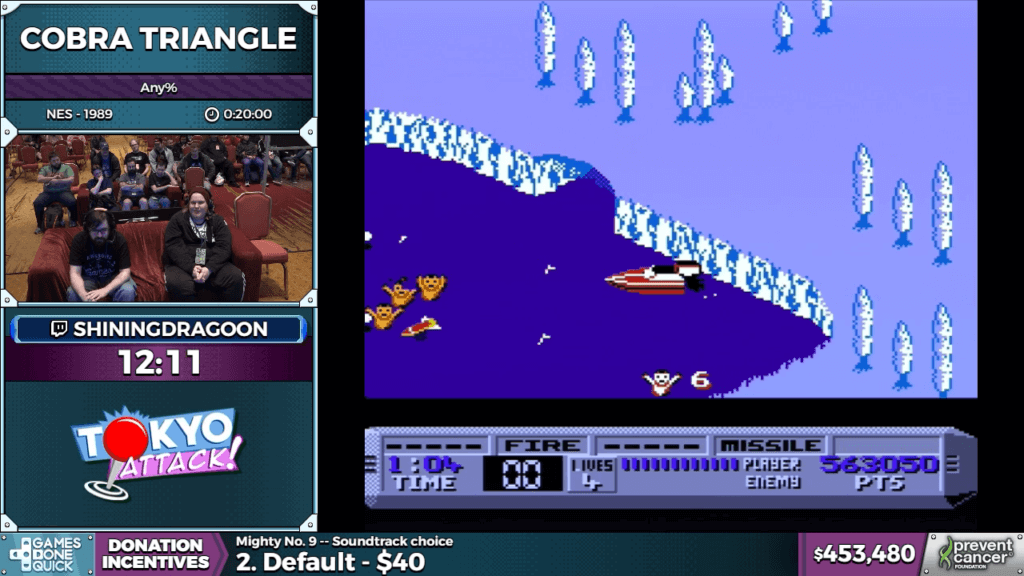 Stage 17 is another giant sea monster.  This time, we get a giant squid!  He stays on the screen for a few seconds, but is quickly introduced to a watery grave. 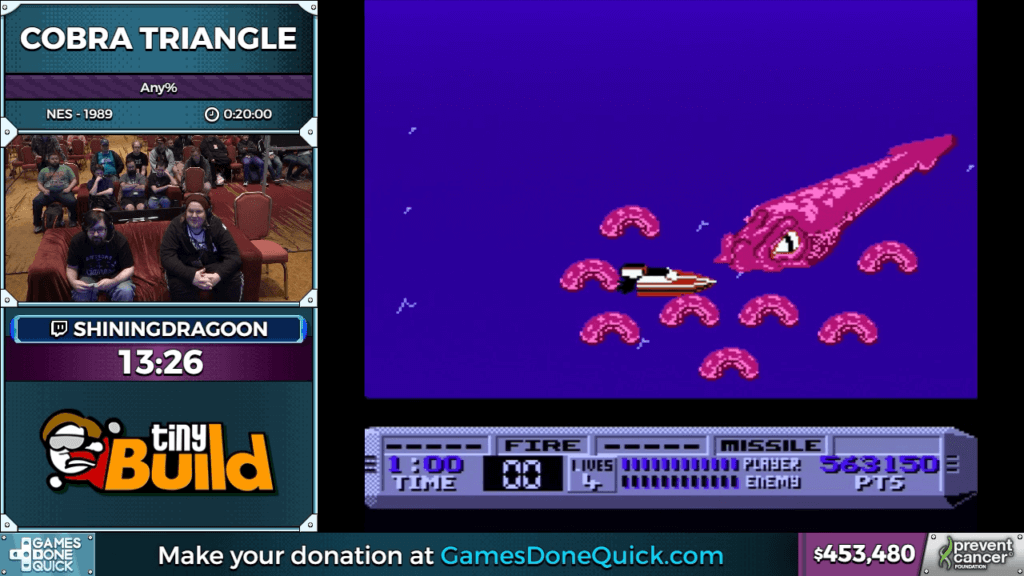 Stage 19 is another competitive race.  Shining plays it safe, and doesn’t attack any of the other racers; picking up any drops would actually be negative at this point.

Stage 20 is a race against the current.  It’s like Stage 4, but with some extra enemies.  Shining knows the pattern though, and navigates the difficult stage with ease.

Stage 21 brings more disposal of mines.  Utilizing a similar swaying dodge motion as before, this plays out just like the last mine disposal level.

Stage 22 is another waterfall jump.  Shining does this flawlessly, nailing every single jump.

Stage 23 and 24 are monster fights.  23 is a repeat of the first sea monster fight, which Shining destroys using the super powerful “force” power up.

Stage 24 is the final boss, and has the player facing a giant shark.  I’m just gonna call it for what it is: Jaws.  Jaws actually gives Shining a bit of difficulty, but just like the rest of the run, he quickly overcomes it.  As the shark meets his timely demise, so does the run. 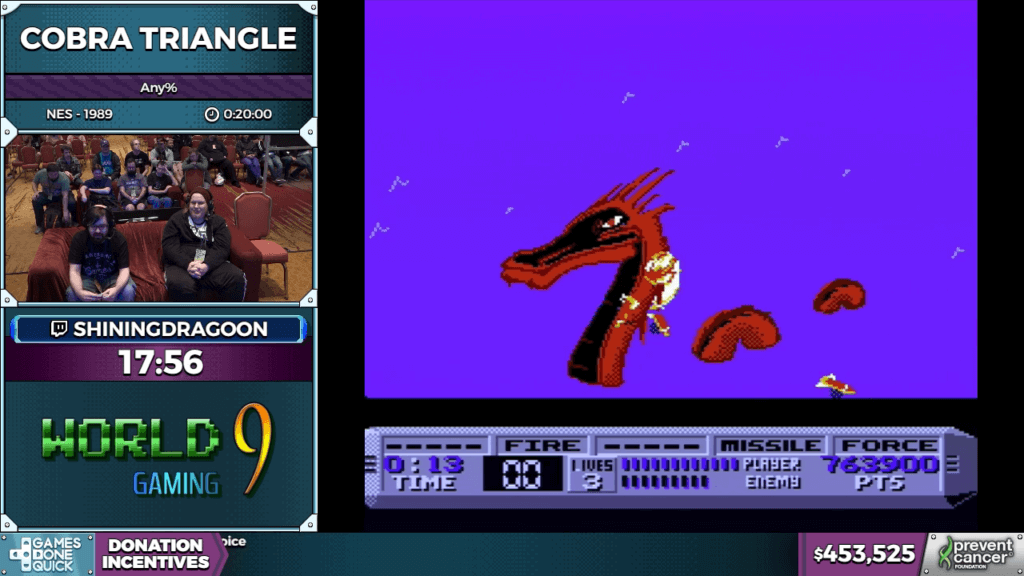 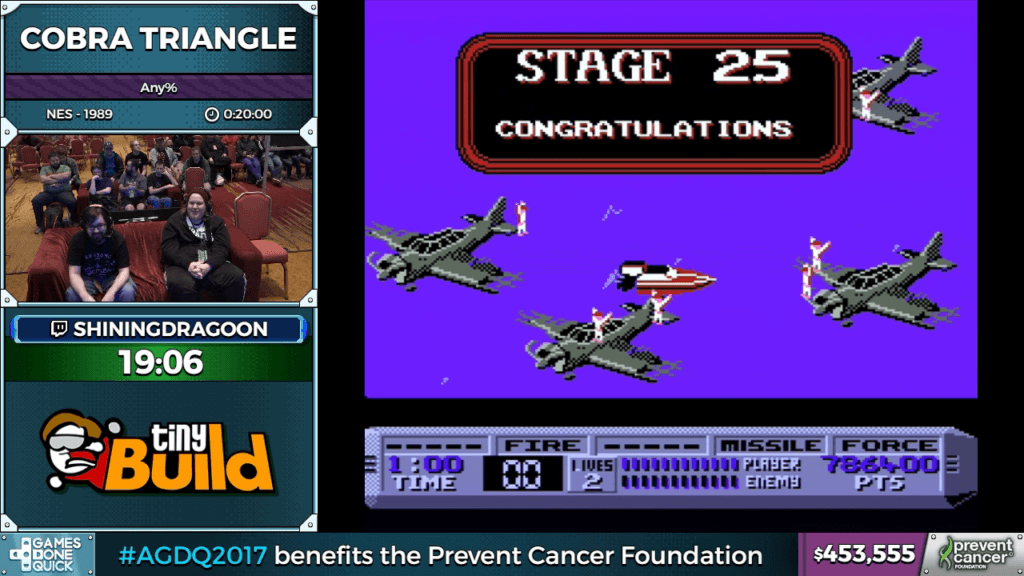