After a pretty slow Monday, we’re starting to get into some NES classics with Blaster Master.  Skavenger and ShiningDragon will be going head to head in the tank controlling platformer.  The Sunsoft classic is well known for its run and gun variety as well as its platforming elements.   Hopefully we’ll see some great glitches that take advantage of the NES hardware, as well as a close race! 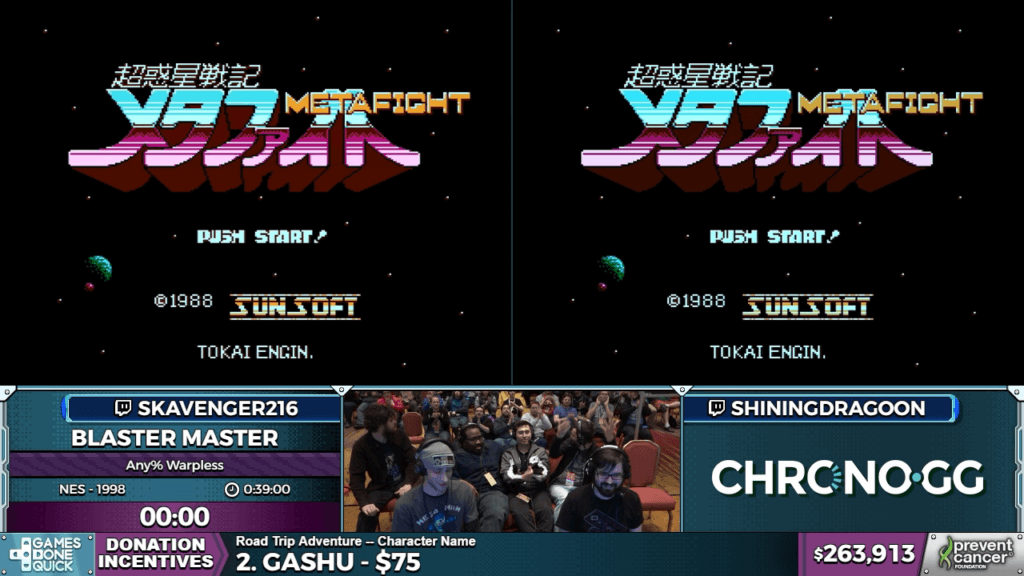 The runners will be running the Japanese version of Blaster Master, most commonly due to text speed being quicker.  However, the Japanese version of Blaster Master has a completely different story.  One of the first tricks that come up is the “pause trick”.  While transitioning through areas, the runners pause and unpause briefly.  This skips an animation, and saves some milliseconds.

In just two minutes, the runners make it to the first boss, with Skavenger216 taking the lead.  He keeps up the lead heading into Area 2.  It’s a pretty big area that can be difficult to navigate.  However, both runners navigate it with ease.  It’s very interesting to see the quick pauses combined with the precision of the movement.  There’s a lot of tiny time savers going on, with no huge glitches yet.

Midway through Area 2, Skavenger takes an early death, allowing ShiningDragoon to take a lead.  Using another pause glitch similar to Megaman’s orange blob, ShiningDragoon decimates the second boss in mere seconds.  However, instead of fighting the boss, Skavenger encounters a never before seen glitch.  The boss fails to appear, and he is able to continue without even having to fight the boss.  Just goes to show how random new strategies can be found! 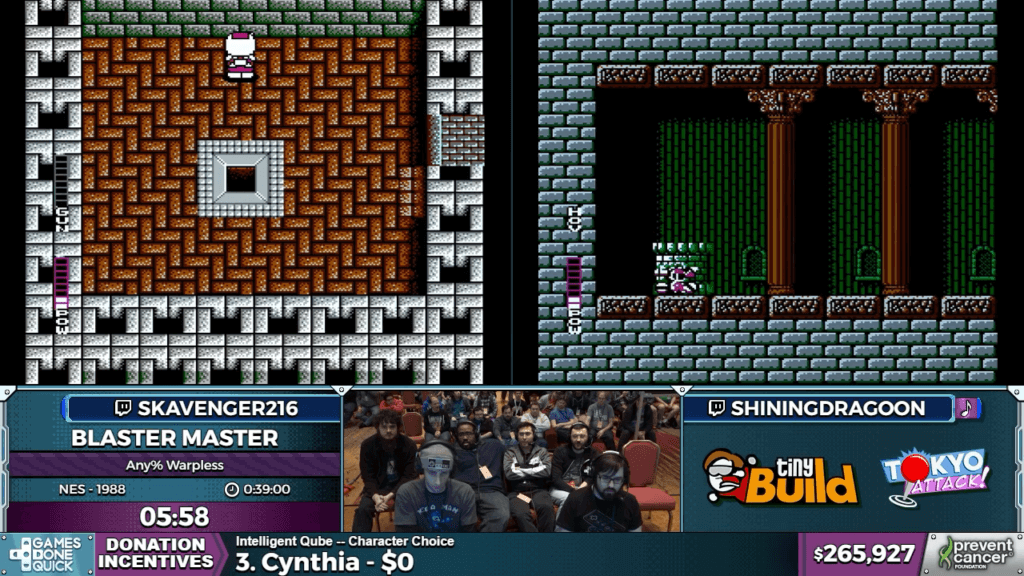 Despite this, ShiningDragoon stays in the lead; even completely skipping a boss fight wasn’t able to bring back the time loss from Skavenger.  He holds this lead continuing through the third boss and Area 3, gaining a bit more distance from Skavenger.  Skavenger takes another death, falling even further behind as they enter Area 4.

It’s actually pretty funny just how much Blaster Master seems to lag.  It seems as though the game can barely handle more than three or four enemies on screen at once.  The frame rate drops are pretty bad, and I know how frustrating that can be (regardless of attempting a speed run).  That’s definitely contributing to Skavenger’s deaths, as both players are taking damage often during lag-heavy sections. 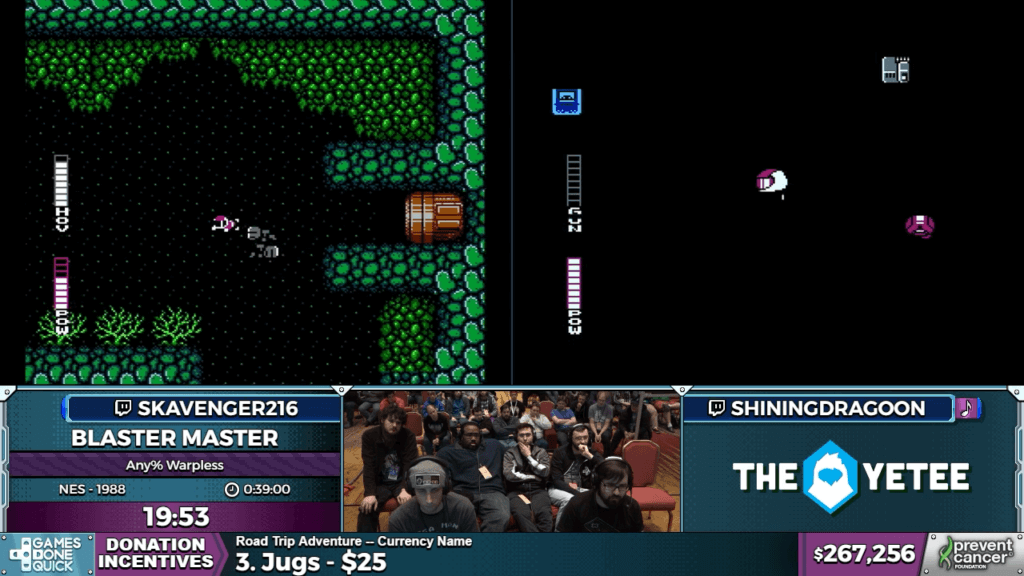 Utilizing the pause glitch once again, ShiningDragoon destroys the fouth boss in just a few seconds.  If you’ve played the game casually, you know that the fourth boss in particular can be a pretty lengthy fight.  He also keeps his commanding lead over Skavenger as they head into Area 5.

After cleaning up Area 5 with relative ease, ShiningDragoon shows off a crazy glitch to defeat the fifth boss.  Instead of fighting him, he walks out of room on the same frame as the boss spawns, confusing the game.  This allows him to hit the boss in the previous room, as the game has already loaded in the boss.  It freaks out the game and is pretty awesome to see (picture below). 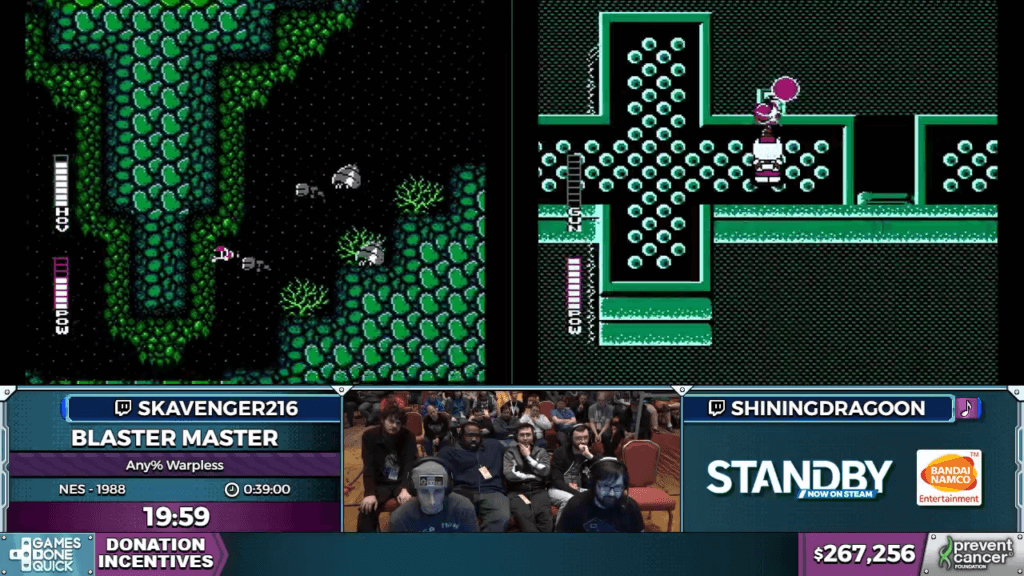 Continuing into Area 6, the platforming gets much more difficult.  Area 6 being the ice area, presents some movement difficulties.  As ShiningDragoon deals with some spikes, he actually earns his first death.  However, he’s not too far from the sixth boss.  I can’t understate just how quickly both runners are able to defeat these bosses using the pause trick.  By pausing and unpausing quickly while the boss is taking damage, you can essentially deal an infinite amount of damage.  Having fought most of these bosses myself, it’s fantastic to see them demolished in the blink of an eye.

As they continue into Area 7 ShiningDragoon takes another death, but it’s still not enough to bridge the gap.  Area 7 is pretty brutal, so anything is really possible as the race comes to a close.  There’s a few tricks that require some tricky jumps, and with ShiningDragoon on his last life, messing up could mean a loss of the lead.  He maintains his lead through the seventh boss, whom he destroys using the pause trick as well. 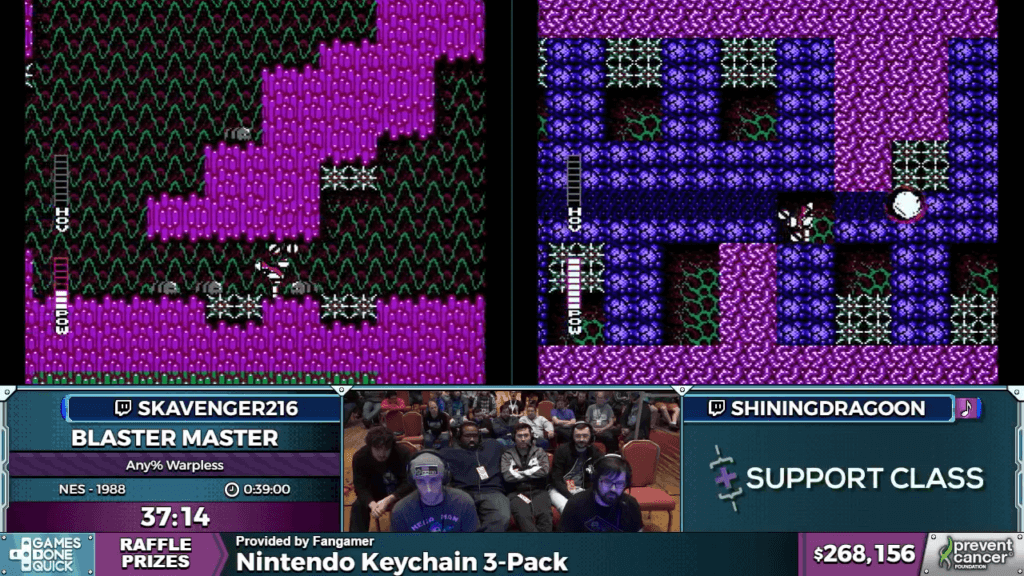 If there’s anywhere Skavenger is going to take the lead, it’s in Area 8.  The ominous Area 8 gets pretty tense, as ShiningDragoon is pretty low on life.  However, he manages to avoid the deadly spikes pretty well, as he makes it to the final fight.  Using a different pause trick, he clears the first phase with speed.  Then, using the glitch from Area 5 instead of a more risky strategy, he manages to secure his win.  Luckily, Skavenger chooses to go for the more risky strategy, and shows off a pretty impressive quick kill. 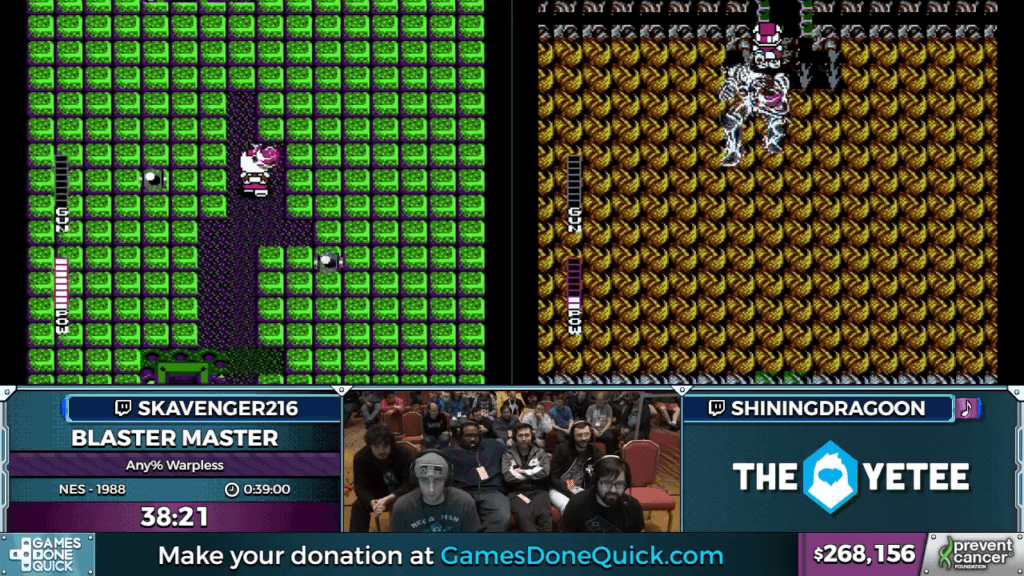 As the final times get marked, ShiningDragoon takes it with his overall commanding lead.  Skavenger216 comes up just a few seconds over estimate. 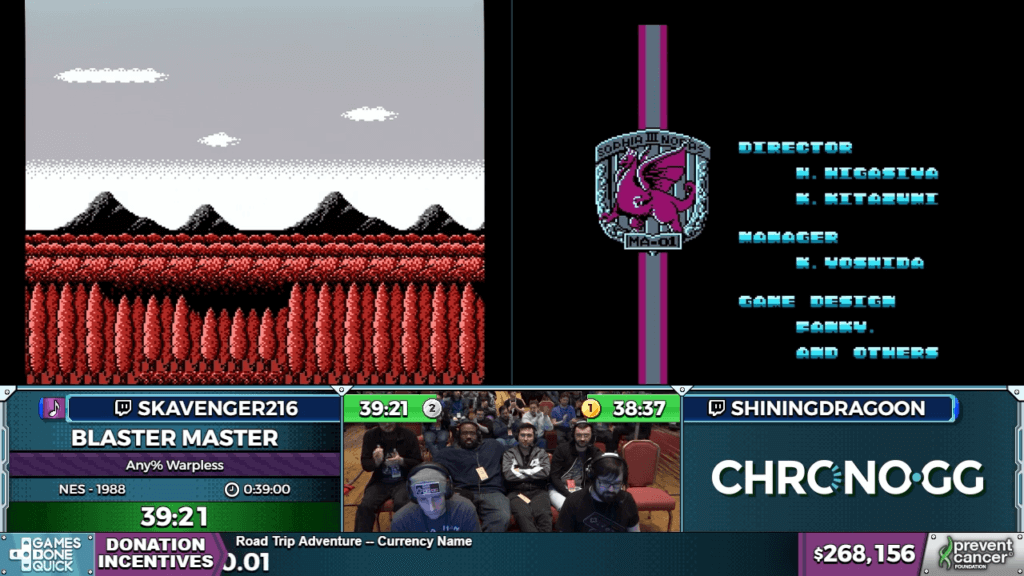