Nintendo announced their latest project, Nintendo Labo, to mixed reactions.  While other big name game companies are pursuing high tech virtual reality, Nintendo has chosen to revert back to the basics.  In the announcement video Nintendo showed off Nintendo Labo, a gaming experience that has you building with cardboard.  It’s definitely a weird move, but the general reception has been positive, both from the fans and shareholders.  Before the project launches this year, there’s a few things you should know before diving in.

Things to Know About Nintendo Labo

The main focal point of discussion around Nintendo Labo has been the use of cardboard as an accessory.  While it can be perceived as a cheap move, it’s important to note that it’s not just a simple carboard building set.  There are two different packages, the Variety Kit and the Robo Kit.  The Variety Kit contains numerous cardboard pieces, meant to be assembled into fun items like RC cars, pianos, fishing poles, and more.  Using your Joy-Con controllers, you combine the cardboard creations and the Joy-cons to make wacky accessories.  The Variety Kit includes a Switch game as well, which gives you assembly instructions on each accessory.  There are also numerous mini-games, each crafted for a unique accessory. 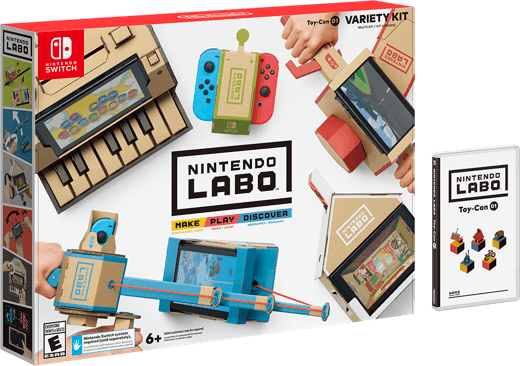 The Robo Kit contains just one cardboard accessory; a wearable robot suit.  From the footage in the release trailer, this seems to be a much more complex creation.  The included game will most likely contain a robot-themed adventure to experience, all while wearing your handy robot suit.

While first impressions might point to a cheaper price, both the Variety Kit and Robot Kit are decently expensive.  More pricey than a normal Switch game, the packages both exceed standard retail expectations.  The Variety Kit is the lesser expensive of the two, costing $69.99 USD.  The Robo Kit is slightly more expensive, totaling in at $79.99 USD.

Disregarding the entire inclusion of cardboard accessories, I find it hard to believe that the included Switch games will contain enough content to warrant the higher price.  If the previous Nintendo release 1-2 Switch is anything to judge, the Variety Kit may be nothing more than a few brief mini-games.  However, it’s entirely unfair to pass judgement before the final product has released.

Nintendo has not announced any specific details regarding replacement piece costs.  However, they have implied that this is just the beginning for Nintendo Labo, with more “kits” to come.

3.  Release Date and How to Pre-Order

Both kits are planned for release on April 20th, 2018, which is just around the corner.  Like many other Nintendo releases, both Nintendo Labo kits are in seemingly high demand.  Unlike the SNES Classic and Nintendo Switch hardware, I believe that Nintendo will sufficiently stock stores with the product.

That being said, you can currently preorder both kits on sites like Amazon.  As we get closer to release day, more retailers will pop up with pre-order options, but early adopters still have some options.

4.  The Target Demographic is Kids

Many Nintendo fans were expecting the next project announcement to be something like Super Smash Brothers or Animal Crossing.  Many fans are upset at the notion that the next Nintendo release is one part carboard and another part imagination.  That being said, Nintendo has done a great job pleasing its more adult fans throughout the launch window of the Nintendo Switch.  With huge and often intimidating titles like Zelda: Breath of the Wild and Super Mario Odyssey, Nintendo has favored seasoned gaming veterans more than its younger audience.

As Nintendo fans, it’s easy to get swept up in the hype and hoopla of new releases, and we all have our favorite franchises.  As silly as Nintendo Labo might seem, it does resonate with the undeniably trademarked imagination that Nintendo is known for.  We live in a world that is highly technological, so seeing a big company push more kinetic and creative projects is refreshing.  Don’t expect to get a AAA quality shooting game in your Variety Kit, expect content geared for kids.