Super Mario Run just released on Apple’s iPhone, and it’s incredibly unique.  Disregarding the actual quality of the game, Super Mario Run is noteworthy due to its existence alone.  Nintendo has always been synonymous with first party loyalty.  Prior to writing things like this Super Mario Run Review, I worked at a video game retail store for close to nine years, and I would encounter the following situation often.

A customer would approach me and ask to purchase a Nintendo game like Mario or Zelda for a non-Nintendo console.  I would politely inform the customer that games like Mario and other Nintendo properties were only available on Nintendo consoles.  I often got confused looks, and I understand why.

Nintendo is massively popular, and it makes sense that they would expand their reach.  I didn’t think it would take them until late 2016 to make the jump, but Super Mario Run marks the first instance in modern gaming where Nintendo has released a game for a system other than its own.  Sure, releasing a mobile game might not be as crazy as releasing a game on Playstation 4 or Xbox One, but the point is the same.  That leaves us with one question… is Super Mario Run any good?  Luckily, that answer is yes. 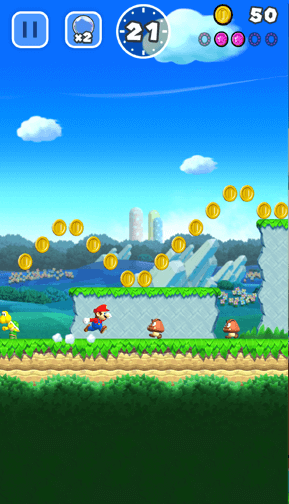 It’s important to understand what you’re getting when you play Super Mario Run.  The entire game has been shrouded in classic Nintendo mystery, so those who are shelling out the $10 USD for the game may not even know what they’re buying.  From the start screen, you have a few different options:  there are single player levels, multiplayer offerings, as well as some pretty interesting decoration mechanics.  The options given to you via the Settings menu are common fare, but the inclusion of graphical quality is welcome.  You can choose between Low and High graphics settings in two different areas, allowing you to tune to your device’s performance.  Thanks to these options you’ll never have to worry about Mario Run getting slowed down or losing frames due to an older phone.

The first thing most players will do is jump into the single player offerings, and that’s where the meat of the game lies.  In an overall sense, the game resembles the “New Super Mario Brothers” aesthetic that came with the Nintendo DS and Wii releases.  Classic NES Mario this is not.  The gameplay is simple, with additional obstacles thrown at you as the game progresses , and controlling the game is a breeze. Mario runs to the right automatically, and you can press on the screen to make him jump.  Pressing on the screen again in the air allows you to flutter.  There’s a bit more control that gets layered on as the levels allow it, but the controls always stay the same.  The game is broken up into six different worlds with four levels a piece.  While the worlds don’t represent the thematic elements that older Mario titles had (water world, lava world, etc), they do have distinguishing features.  There are three “normal” levels, with a final level being either a Bowser Castle or a Koopa Ship.  As you run through the levels, there are several colored coins to collect.  Collecting all the coins in one run unlocks an extra set of coins to attempt.  Three coin sets exist for each of the levels, turning the 24 levels into 72 coin challenges.

Besides the colored coins, you’re constantly trying to set a personal record for overall coins collected on each level.  You earn coins by collecting them the normal way, defeating enemies, and being stylish in play.  As you defeat enemy types, you “level” them up.  As enemies gain levels, they yield more coins for defeating them.  This reinforces replayability, as failed coin attempts add to the enemy coin yield.  I briefly mentioned additional obstacles, but I don’t want to spoil too much.  Beating all six worlds for the first time is quick, so you won’t be oblivious to the game’s content for long; however, half of the fun is the surprise of seeing different enemies and situations.  None of this is breaking new ground for the Mario franchise, but it’s interesting nonetheless.  You’ll be happy to know that the game doesn’t play it safe and gets creative.  You won’t just be jumping on Goombas and Koopas the entire game; there’s plenty of enemy variety to keep it interesting.  In fact, no two levels feel remotely the same.  Each new level is a different experience, teaching you as you go.

Single player is fun, but multiplayer is where Nintendo constantly ends up being lackluster.  Super Mario Run’s multiplayer offerings are easy to understand, fun to play, and addictive.  Multiplayer exists in the form of “Rally” mode.  In this mode, you go head-to-head against another player on the same level.  The goal is to collect more coins, get further ahead, and play with more finesse than your opponent.  This is more easily said than done, as powerups and simple mistakes shift the tide of battle immensely.  You’re never quite sure if you’re in the lead or trailing until the final tally.  It makes playing the level incredibly invigorating; you never have the opportunity to take it easy due to a big lead.  Defeating opponents online gains you different colored Toads, but you’ll have to put your own Toads on the line.

What are Toads used for, you may ask?  Toads are essentially the currency when it comes to the decoration mechanics.  At the main screen, you have an overview of a tiny area of land.  By accessing the shop menu, you can spend Toads to unlock new structures, decorations, and items.  While most of this is for show, some unlocks reveal new playable characters.  There’s a handful of characters you can play as besides Mario.  This encourages not only replaying the single player levels with the new characters, but continuously playing multiplayer to get new Toads.

Nintendo’s First Attempt is a Win

Let’s be honest, Nintendo doesn’t always seem to have the clearest sight on what the fans like.  If they did, we’d be playing Metroid Prime 4 or a new F-Zero by now.  There are some flaws with Mario Run, there is no doubt.  Most of them are small and passable, but glaring examples like a constant need for internet connectivity keep Mario Run from being perfect.  That being said, they have an undeniable understanding about what makes a game good.  Not only that, but they understand the mobile phone gaming market; a close cousin to the 3DS market.  It’s fantastic that they were able to understand what makes a mobile game great, and then execute it flawlessly.  When I started up the app, I was worried that Nintendo was going to stumble with their first iPhone excursion.  I can’t help but be pleasantly surprised at their ability to craft compelling experiences.  Beyond all else, there’s one thing that makes Super Mario Run great.  At a certain point, you’ll forget you’re playing a game on your iPhone.  In that window of immersion, you’ll feel just like you’re playing a session of Mario on your 3DS.  That’s a feat by itself, let alone the fact that it’s a great Mario game.  If anyone was going to dominate a new market from the jump, I’m happy that it turned out to be Nintendo.  While Super Mario Run may not become massively popular like Pokémon GO or Angry Birds, I firmly believe that it’s a better game than both.