When it comes to my personal preference, I’ve always liked the 3D Metroid titles over the classic 2D format. When the series made the jump to modern hardware in Metroid Prime on the Gamecube, we got a new first-person perspective to play with. I always gravitated towards the Prime series more than the classic Metroid games like Super Metroid, but maybe that’s due to my lack of nostalgia. Growing up, I didn’t play a ton of classic Metroid. I can understand the fandom and the reason people like it, but the formula never really clicked for me. That remained true until just recently, as Metroid: Samus Returns has converted me. 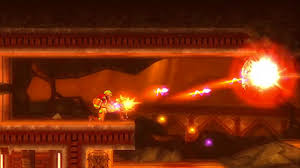 If you played the original Metroid II, the story and location have not changed. After supposedly eliminating the titular alien threat in the original game, our sci-fi bounty hunter is sent to a new planet to investigate reports of their return. The story in Metroid: Samus Returns is very light, only boiling down to a few lines of text. While the guts of the original game are still here, the entire experience has been overhauled to fit with modern times.

For New Fans and Old

This means that the classic Metroid formula is more accessible to newcomers, something that I greatly enjoyed. The Metroid formula revolves around upgrading Samus, backtracking to previously unreachable areas, and using your new powers to access new areas. In Metroid: Samus Returns, Samus must hunt down a specific amount of metroids in each area before progressing. It makes for a rewarding gameplay loop of encountering mini-boss metroid fights, then exploring and gaining new powers. If there’s one thing that stuck out to me across the entirety of the game, it’s the growth of power you feel. 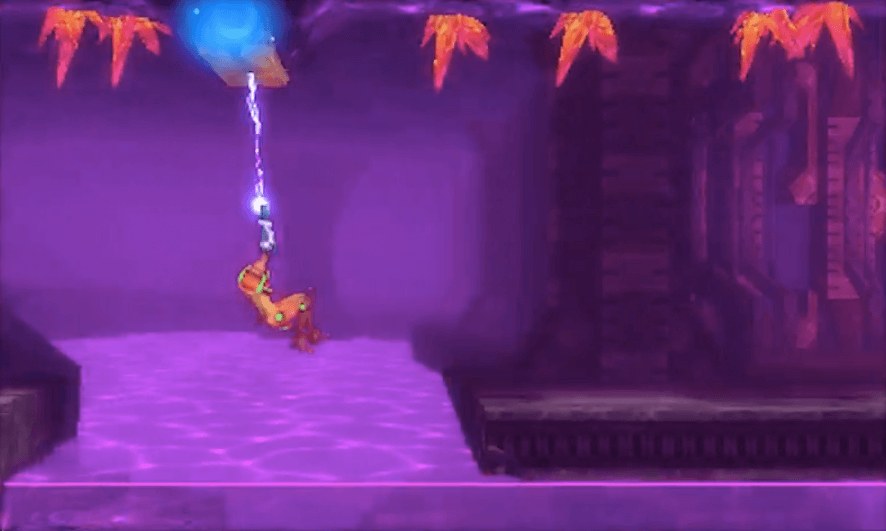 Samus starts with pretty bare-bones weaponry and abilities, but that obviously changes as you progress. With each new power up or ability, Samus feels decidedly more powerful, really invigorating you as a player. These increases in strength feel notable too, as there was several times during the game where I was sure I had reached my maximum power, only to discover another ability that much more useful.

In addition to the normal upgrades like new ammo types and movement abilities, Metroid: Samus Returns features four new abilities not in the original game. One of these, the scanner, completely changes how I approached the game and made it more enjoyable overall. In previous Metroid games, the map would become uncovered as you explored, with secret passageways often pretty difficult to find.

Metroid: Samus Returns gives you the ability to pulse a scanner, showing you the surrounding map on your bottom screen. Additionally, this highlights breakable blocks near you, signifying where hidden areas might be located. There’s three other power ups that are all equally useful, including a super armor, a rapid fire, and the ability to slow time. These four power ups made the experience much less tedious than normal, and aided exploration greatly. 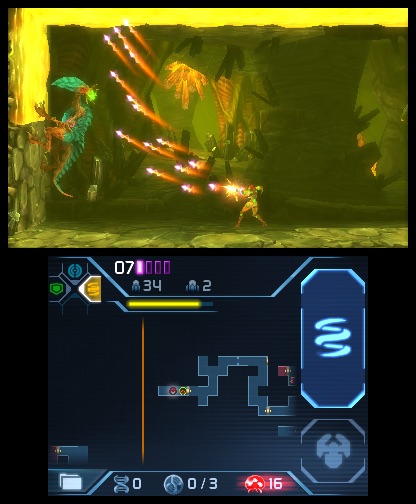 That being said, the game only truly suffers in a few areas. The metroid mini-bosses take a few different forms, but besides a unique attack or two, the strategy to defeating them remains similar. This isn’t a big deal, but when you run into one of the few excellently designed major bosses, you’ll find yourself wishing that the smaller bosses were more varied. This lack of variety extends into the environmental design as well. While the areas have distinct color palettes and effects, you’re always running around rocky terrain. Unlike other Metroid titles, you wont be blasting through test labs, dungeons, and other environments. For the most part, you’ll be shooting at rocky walls. It’s a small nitpick, but for a game that excels so well in its gameplay, I wish the art design held up a bit more. 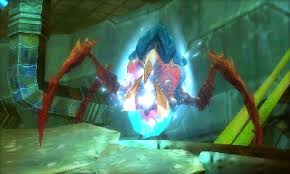 Thankfully, the game runs incredibly well, especially considering the fact that it’s running on the 3DS, a piece of hardware that’s more than 6 years old. I only saw frame rate drops a handful of times, and these were due to obvious reasons. However, Metroid: Samus Returns is able to maintain a solid frame rate and visual spectacle despite the hectic on screen action, which is commendable to say the least. When all is said and done, the game may not blow you away with its art direction, but it’s definitely impressive in execution.

Ultimately, Metroid: Samus Returns is a great release. It’s welcoming to newcomers of the series, complex and difficult enough to encourage veterans towards full completion, and an all around good time. Whether you consider yourself a fan of Metroid or not, you should think about picking this game up. While it’s not a completely new experience, it’s modified in a way that makes it more accessible for those who are willing to try. The game can be tough, but if you’re willing to stick with it, Metroid: Samus Returns is equally rewarding.