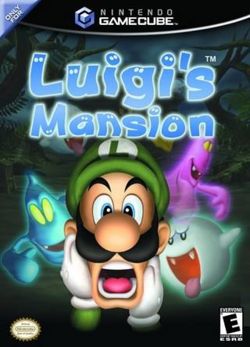 Luigi’s Mansion is possibly the best Mario spin-off game of all time. Believe me, I understand the weight that comes with that statement. With a plethora of titles under consideration, namely “Mario Party” and “Super Smash Brothers”, some might even call my opinion crazy. However, in 2001 (when Luigi’s Mansion released) I was in a different mindset than most. After receiving my GameCube for Christmas, I made a mad dash (accompanied by my parents) to the local game store to pick up a few games. At the time, the selection was limited, but the choice was obvious. Being the first Mario-inspired title on the new system, I had to pick it up. Fifteen years later, I’m incredibly happy I did.

Luigi’s Mansion launched on November 18th to generally positive critical response. At ten years old, the general opinion of the game had no weight. At the time, I wasn’t a huge horror fan. I also tend to avoid calling the game a “horror” title, as it really doesn’t embody the fear and discomfort of the genre. In fact, it’s a definite Nintendo brand of horror; a silly game about ghosts that most kids can play without being frightened. I recently sat down and played through Luigi’s Mansion for a Halloween Twitch stream. After completing the game nearly 100% in under three hours, I consider myself pretty well versed in the game. Considering how big of a fan I am, one could say that it’s my duty to defend it.

For those who are unfamiliar, Luigi’s Mansion follows the titular character as he explores a creepy mansion. After winning said mansion in a prize giveaway that he never entered, Luigi send Mario to go investigate. After Mario takes a bit too long to return, Luigi goes off to find his brother. The story is small and introductory, and the overall narrative is actually pretty unimportant. Rather, the game uses the different rooms and ghosts of the house to create a unified theme. The whole story is about Luigi overcoming his fears, not about a big scary house.

The game-play is simple as well. Players control Luigi as he goes from room to room, sucking up ghosts and exploring the mansion. By stunning the ghosts with a flashlight he is able to suck them into his “Poltergust 3000”, a glorified vacuum given to him by Professor E. Gadd. This eccentric doctor of questionable sanity guides Luigi through his ghost catching adventure, so you as a player never truly feel alone.

As you progress through the house, each room you explore will have a theme. Whether it’s as unassuming as the Kitchen or as exotic as the Safari Room, each room contains a unique ghost that is themed around said room. This is where Luigi’s Mansion truly shines. Think of each unique ghost as a puzzle. Sure, you can see the ghost, but you have to figure out how to expose their heart to catch them. For example, the never ending binge eater ghost of the Dining Room provides an early challenge. Players have to light all of the candles on the table with the flame power-up, then catch the butler ghosts who keep bringing food to the table. After that, you have to suck up the remaining spectral snacks on the table to anger the ghost. Once those steps have been completed, you can attempt to suck up the ghost himself.

Not all unique ghosts have this many steps to capture, but all of the ghosts have this central theming. This is where many games should take a note out of Luigi’s Mansion’s book. The consistency between enemy and level theming is always there. Find yourself in the Music Room? Better believe you’re going to be solving a musical puzzle. The ghost in the Gym will have you hitting the punching bags, and you’ll have to play a round against the Billiards Room ghost. All of these different puzzles and activities are centralized around the basic game-play. Since there isn’t a huge amount of game-play variation, the puzzles are able to be inventive and interesting, rather than frustrating.

The game focuses on this overall game-play cycle. After capturing a unique ghost, they will usually drop a key or important item to allow you to continue your exploration. By allowing you to progress through the game room by room, Luigi’s Mansion has a leisurely linear pace that I really enjoy. I’m the type of gamer that will take a well designed linear experience over a decent open world one, but that’s just me. The game’s linearity works in it’s favor, ensuring that you’re never lost or questioning where to go or what to do. The game conveys your task and purpose excellently, never leaving the player feeling unsure.

Like most Nintendo games, Luigi’s Mansion is ripe with secrets. At first glance, the potted plants in the mansions outdoor areas have no game-play usage. Once you acquire the water power-up, revisiting and watering these plants give you gems and coins towards your overall score. The game never tells you this, choosing to rather let you find it out for yourself. The game reinforces additional exploration by adding game-play incentive for it early on. In one of the early rooms, Luigi accidentally sets fifty Boos free from confinement into the mansion. These Boos occupy all of the various rooms in the game. Usually after catching a room’s unique ghost, you’ll go searching for its Boo, using the “GameBoy Horror” feature in the game. This overt inclusion of another Nintendo property (the GameBoy Color) really fits in with the silly tone. The GameBoy Horror has a small light that will beep and change color as you get closer to the Boo. By interacting with the room’s objects, you will force the Boo out of hiding and into combat. However, Boos encourage more exploration and experimentation than the unique puzzle ghosts. It’s a core game-play mechanic that encourages players to take a second to look around. Due to the Boo mechanic, I can tell you where every ‘interactable’ item is in a singular room. While that speaks to how much I know the game, it also speaks to how well Nintendo was able to integrate environment design with game-play.

In general, Luigi’s Mansion is a great game for a bunch of really small reasons. There’s not one single “wow” moment to point to, or a specific game-play mechanic to thank. The game succeeds because of its flawless combination of interesting design choices. The unique ghost mechanic allows for a variety of environments and puzzles, and the game does a great job constantly surprising the player. I hesitate to say more, I rather encourage my readers to play the game if they have the means. If not, check out a speed-run of the game or a long play, it’s definitely worth seeing. Since the game celebrates its fifteenth anniversary on the 18th of November, there’s no better time to jump back in.